German CEOs urge lawmakers to step up action against corruption 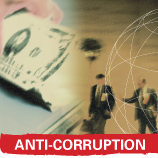 16 August 2012 - In an unprecedented move, corporate chiefs from 35 top German companies have urged their country's lawmakers to ratify the United Nations Convention against Corruption in a joint letter recently published by major German and international newspapers. Warning that failure to ratify the Convention would harm the reputation of German firms abroad, they concurred: "In the international context, a democratic country such as Germany must be entirely credible and should not unnecessarily make itself vulnerable."

"German industry is very much interested in corruption-free and fair competition in all partner countries", wrote the business leaders, recognizing that the Convention, which has been ratified by 161 States, is the most significant international treaty in the global fight against corruption. "The ratification of the Convention would support the multiple efforts of companies in the prevention of corruption", they added.

Germany signed the Convention in December 2003, but has not yet ratified it. According to the chief executive officers, one of the impediments to ratification is the absence of clear legislation in Germany that would punish bribery of elected officials. "Honest parliamentarians have nothing to fear from tighter rules", they wrote.

Corruption is one of the world's greatest challenges and a major hindrance to development. The impact of corruption on the private sector is significant - corruption impedes economic growth, distorts competition and presents serious legal and reputational risks. Corruption is also costly to business, and those costs are ultimately passed on to consumers.

In recent years, private-sector entities have sought to play a more active role in preventing and combating corruption, and have recognized that more concrete action is needed to ensure business integrity and a fair and level playing field for all. Calls for countries to ratify and accede to the Convention have been made in all major forums, including the Group of Eight and the Group of 20.

Welcoming the move by the German companies, Dimitri Vlassis, Chief of the Corruption and Economic Crime Branch of UNODC, said: "This initiative demonstrates the need for both public and private actors to work together in order to further global efforts to combat corruption and achieve an effective and comprehensive anti-corruption framework."

Recognizing that the prevention and combating of corruption is the shared responsibility of all sectors of society, UNODC is developing a number of initiatives that engage key stakeholders, including the private sector. One such initiative is the recently launched "Integrity Initial Public Offering" (IPO) initiative. As part of the initiative, UNODC is looking for companies willing to invest in a fund which will be used to respond to the needs of developing countries for technical assistance. "We are looking for investors who will be ready to take a position in promoting integrity", says Mr. Vlassis. "By working in partnership and by investing in the areas of the world that need our assistance, we can help to achieve competitive but fair markets. But we need to act fast, and we need to act decisively. Otherwise, we risk seeing the level playing field become an uphill struggle."

UNODC is also working with the private sector to adopt anti-corruption policies that are aligned with the Convention and that strengthen transparency and accountability. Together with the United Nations Global Compact, the Organization's largest public-private partnership forum, UNODC has developed an e-learning tool for the private sector, aimed at enhancing understanding of Principle 10 of the Global Compact, entitled "Anti-corruption", and of the Convention as the basis for that Principle. Since its launch a year ago, more than 300,000 people have visited the website. The e-learning tool is accessible at http://thefightagainstcorruption.unodc.org.

" The fight against corruption" e-learning tool