Global Migration Group: acting together in a world on the move 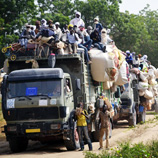 21 August 2012 - UNODC officially assumed the chairmanship of the Global Migration Group on 1 July 2012, for a period of six months. The Group is an inter-agency body bringing together heads of international organizations to promote the wider application of relevant international and regional instruments and standards relating to migration.

The Group, which comprises 15 United Nations entities and the International Organization for Migration, encourages the adoption of more coherent, comprehensive and better-coordinated approaches to the issue of international migration. The Group is particularly concerned with improving the overall effectiveness of its members in capitalizing on the opportunities and responding to the challenges presented by international migration.

As chair of the Group, Mr. Fedotov will attend the sixth summit meeting of the Global Forum on Migration and Development in Mauritius in November 2012. During that meeting, Mr. Fedotov will make a joint statement before the Member States on behalf of the Group on combating violence against migrants, migrant workers and their families.

In addition, under the chairmanship of UNODC, the Group will produce a thematic paper entitled "Protecting migrants and migration from criminal exploitation: a human rights response to trafficking in persons and smuggling of migrants." The publication, addressing the security and safety of migrants, will be launched at the end of the year.

The Global Migration Group is currently conducting an internal review to take stock of accomplishments and challenges since its creation in 2006. The ultimate goal of the review is to support preparations for the second High-Level Dialogue on International Migration and Development to be held during the sixty-eighth session of the General Assembly in 2013.

The Group was established by the Secretary-General in early 2006 in response to a recommendation of the Global Commission on International Migration for the establishment of a high-level inter-institutional group of agencies involved in migration-related activities.

Members of the Group recognize that international migration is an important, complex and multidimensional issue, and that, properly managed, with full respect for human rights and international legal principles, migration benefits individuals and societies and can make an important contribution to the early achievement of internationally agreed development goals and objectives, including the Millennium Development Goals.

The Group promotes dialogue on the interconnectedness of migration, addressing such topics such as the economic crisis, development, human rights, children, women, climate change, health, governance,  trafficking in persons and smuggling of migrants.

UNODC, as the guardian of the United Nations Convention against Transnational Organized Crime and the Protocols thereto, assists Member States in their efforts to implement the  Protocol to Prevent, Suppress and Punish Trafficking in Persons and the Protocol against the Smuggling of Migrants by Land, Sea and Air.