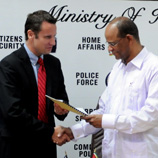 23 August 2012 - Guyana and Suriname are the first two Caribbean countries to join the highly successful Container Control Programme, which works with countries to improve port security and prevent the illegal use of sea containers in drug trafficking and transnational organized criminal activities, such as trafficking in chemicals used in the manufacture of drugs (precursors), smuggling of goods (including counterfeit goods), tax evasion and possible terrorist acts.

This week, the two countries signed memorandums of understanding with UNODC that will see the establishment of joint port control units in Port Georgetown (the John Fernandes port) in Guyana and Nieuwe Haven port in Suriname.

The Caribbean has become increasingly vulnerable to the illicit flow of drugs from South America to North America and Europe via maritime containers, particularly as Latin American States tighten border control and security. Given their geographic location, Guyana and Suriname face significant threats from transnational organized crime with regard to container trade.

The joint port control units in the two countries will strengthen the control of containers entering and leaving the ports, improve the coordination, analysis and exchange of information in real time, share human and technical resources to avoid duplication of activities and facilitate safe foreign commerce. Container inspection in the two ports will be carried out by a team trained and equipped to work together to systematically target high-risk containers with minimal disruption to the free flow of legitimate trade.

A two-week training programme will be conducted from 1 to 12 October for Guyanese and Surinamese officers drawn from relevant Government agencies, and it is expected that the joint port control units in both countries will commence operations in mid-October. Jamaica and the Dominican Republic are also expected to establish similar units later this year.

Speaking in Georgetown, the UNODC regional manager for the Container Control Programme, Troels Vester, said: "The signing of these memorandums of understanding by the Guyanese and Surinamese Governments is a key example of UNODC efforts to increase and revamp its presence in the Caribbean. These efforts will be further consolidated by the re-establishment of a UNODC Office for the Caribbean (under the Regional Office in Panama), which will become operational in early 2013 and which will focus on delivering programmes that have been adapted to the unique situation of the region."

UNODC and the World Customs Organization launched the Container Control Programme in 2006 to boost the efforts of countries with respect to inspecting and detecting illicit goods transported via sea containers. Since its inception, the programme has achieved remarkable results, seizing 195 containers of drugs and 487 containers of fraudulent and contraband goods. The programme has experienced rapid expansion in Latin America, with significant successes in port control units in Costa Rica, Ecuador, Guatemala, Panama and Paraguay and with more than 13 tons of cocaine seized since the beginning of this year.

The Container Control Programme presently has 30 operational port control units in 14 countries. Located in major illicit drug-producing regions, as well as along maritime trade routes used for the shipment of illicit drugs, precursor chemicals and counterfeit goods, the programme continues to assist in improving national and international container security and cooperation.

UNODC in Mexico, Central America and the Caribbean