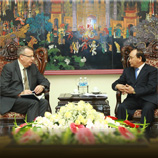 4 December 2012 - In his first ever official visit to Viet Nam, the Executive Director of the United Nations Office on Drugs and Crime (UNODC) Yury Fedotov met today with Mr Nguyen Xuan Phuc, Deputy Prime Minister of Viet Nam and Chairman of the National Committee on AIDS, Drugs and Prostitution Control.

Mr. Fedotov noted the country's progress in economic and social spheres and commended the Government on its adoption of amendments to the Law on Handling Administrative Violations and its strong commitment to closing compulsory treatment centres. The Executive Director also praised the recent approval of the National Strategy on HIV and programmes pertaining to drug control and crime prevention. Mr. Fedotov stated his belief that these changes will provide a clear pathway forward in the future.

Mr. Fedotov also recognized Viet Nam's recent ratification of the UN Convention against Transnational Organized Crime and its work to implement the UN conventions which it ratified some time ago - those on anti-corruption (in 2009) and on drug control (in 1997).

Mr. Fedotov welcomed both the growing role of Viet Nam in the region and its improved efforts to contain the trafficking of drugs in the Greater Mekong. "We need to build a partnership in the region to support Myanmar," said Mr. Fedotov, referring to his recent exchanges, while in Myanmar, with that country's leadership. Myanmar is the source of most of the heroin and methamphetamines consumed in SE Asia and has requested UNODC support to help counter this trend.

During his visit, Mr. Fedotov also met with a number of other key cabinet members. Issues discussed included drug control and organized crime.

"Human security is threatened wherever organized criminal groups emerge and the rule of law is challenged. These transnational organized criminal syndicates - who trade in illicit drugs, human beings, counterfeit products, fraudulent medicines, protected natural resources like timber, fish and other wildlife, and goods that harm the environment - are a threat to public health and society's well-being. Let's put them out of business!" said Mr. Fedotov.

Viet Nam is the third country in Southeast Asia to be visited by Mr. Fedotov - after Thailand and Myanmar - as part of an extensive five-country, 12-day mission. Mr. Fedotov travels next to Lao People's Democratic Republic before concluding his mission in Indonesia where he will engage both with government counterparts and ASEAN leadership.