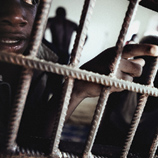 On 23 and 24 January, experts met in Vienna to formulate and accelerate the adoption of effective measures to protect children within the juvenile justice system against all forms of violence. At the meeting, experts shared good practices and reviewed a concept paper containing recommendations on strategies and measures to prevent and respond to violence against children within the juvenile justice system.

"On any given day, children in conflict with the law encounter violence, including from police and security forces, from adult detainees, from staff at detention centres and from their own peers, while some even attempt suicide. These are the invisible children; our role is to bring their misery into plain sight," said UNODC Executive Director Yury Fedotov.

The vast majority of children in detention are charged with petty crimes, and are first-time offenders. Many have committed no crime at all, but have been rounded up for vagrancy, homelessness or simply for being in need of care and protection.

Marta Santos Pais, the Special Representative of the Secretary-General on Violence Against Children, said: "Juvenile justice is a core dimension of the rights of the child and a pivotal area where States' commitment to children's rights can be best expressed. We have a unique opportunity to promote a paradigm shift and help the criminal justice system evolve from an adult universe where children and adolescents hardly belong and where violence remains a high risk into an environment where children are seen as rights holders and are protected from all forms of violence at all times."

UNODC activities to promote juvenile justice, including the rights of children in the justice system, are founded on the Convention on the Rights of the Child, international standards and norms and the recommendations of the Secretary-General's Study on Violence against Children.

The expert group meeting was jointly organized by the Office of the High Commissioner for Human Rights, the Office of the Special Representative of the Secretary-General on Violence against Children and UNODC with the support of the Government of Austria, and was attended by representatives of UNICEF and other international organizations.