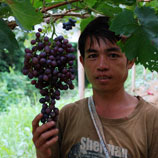 2 August 2012 -  It is a challenge to wean farmers off opium poppy cultivation in Lao People's Democratic Republic, once part of the Golden Triangle of South-East Asia. Without meaningful employment, subsistence farmers fall back on the lucrative cash crop to support themselves and their families.

As recently as 1998, Lao PDR was the third-largest illicit opium poppy producer in the world and had one of the highest opium addiction rates. From 1998 to 2005, opium poppy cultivation in the country was reduced by 93 per cent and opium addiction by 68 per cent, thanks to the Government's strong commitment.

In 2005, it became illegal to cultivate opium poppy in the country, and while this was a move to reduce the production of opium, it left many farmers without the means to make a living.  Without an alternative source of income, many of these farmers were at high risk of reverting to opium poppy cultivation.

In Lao PDR, farmers in the Oudomxay province with the support of UNODC have benefited from an alternative development project that supports the implementation of improved production technology. Farmers have been supported to develop greenhouse technology and small irrigation systems, and received training on cultivation techniques, such as producing and high-yield and disease-resistant seeds. Since the project commenced, farmers' incomes from the sale of produce such as peaches and organic vegetables have increased tenfold.

Encouragingly, areas where sustainable alternative development has been provided, such as Oudomxay Province, have not experienced an increase in opium poppy cultivation.

The project in Oudomxay Province takes a holistic approach and has been designed to increase the production of legal crops, create income generating activities, develop small farmer associations and cooperatives and prevent opium production and consumption. Special attention is given to increasing women's participation in project activities.

By addressing food insecurity, the project in Lao PDR will assist the government in long-term efforts to reach the Millennium Development Goals (MDGs) on poverty eradication and hunger, while at the same time helping the country achieve the MDG targets for gender equality and environmental sustainability.

An important component is promoting south-south cooperation for development. The project, funded by the German Government, is being implemented in partnership with the Thai Royal Project Foundation and the Highland Research Development Institute of Thailand (HRDI), which has more than 40 years of agricultural experience in working with ethnic hill tribes and with highland crops.

In March, UNODC and the United Nations Industrial Development Organization (UNIDO) stepped up efforts to promote grass-roots development in poor rural communities dependent on the cultivation of illicit drug crops. Since 2007, the two agencies have been working on projects to help rehabilitate opium addicts and involve them in income-generating activities; provide social services and basic infrastructure; and improve market access for products.