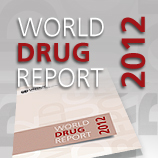 26 June 2012 - UNODC Executive Director Yury Fedotov today in New York launched the 2012 World Drug Report during a General Assembly thematic debate on the impact of drugs and crime on development.

The 2012 World Drug Report shows that global patterns of illicit drug use, production and health consequences largely remained stable in 2010, however opium production had rebounded to previous high levels in Afghanistan, the world's biggest opium producer. Looking at the global picture, lower overall levels of cultivation and production of opium and coca have been offset by rising levels of synthetic drug production.

While the global production of opiates remains high, opiate use in North America and Europe appears to be stable or shrinking. However, in Africa and Asia, which together account for about 70 per cent of global opiate users, there is a lack of clear data so the possibility may exist of increasing, but undetected, use.

The number of estimated annual cocaine users in 2010 ranged from 13.3 million to 19.7 million, or around 0.3 to 0.4 of the global population aged 15 to 64, while the major markets for cocaine continue to be North America, Europe and Australia. The total area under coca bush cultivation fell by 18 per cent between 2007 and 2010, due largely to sharply declining coca cultivation in Colombia from 2007 to 2010.

On synthetic drugs, the Report shows that the use and global seizures of amphetamine-type stimulants, the second most widely used drugs worldwide, remained largely stable. However, in 2010, methamphetamine seizures (45 tons) more than doubled those of 2008 (21.5 tons), due to significant seizures in Central America and East and South-East Asia.

Cannabis remains the world's most widely used illicit substance, with between 119 million and 224 million estimated cannabis users worldwide. Europe is the world's biggest market for cannabis resin (hashish) mainly supplied by Morocco, although its relative importance is declining.

On prescription pharmaceuticals, the Report reveals that in many countries there is more non-medical use of prescription drugs than of controlled substance, other than cannabis. While illicit drug use is overall much higher among males than females, the non-medical use of tranquillizers and sedatives is higher among women, as shown where data are available (South America, Central America and Europe).

Addressing the General Assembly, convening today on the International Day against Drug Abuse and Illicit Trafficking, Mr. Fedotov said illicit drugs fuel crime and insecurity, while undermining human rights and posing significant public health risks: "Heroin, cocaine and other drugs continue to kill around 200,000 people a year, shattering families and bringing misery to thousands of other people, insecurity and the spread of HIV. The public health aspects of prevention, treatment, rehabilitation, and reintegration all have to be recognized as key elements in the global strategy to reduce drug demand."