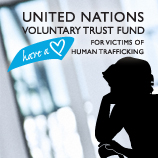 11 June 2012 - Ana, a teenage girl from Albania, was only 2 years old when her parents divorced. Ana was sent to live with her father's new family, but when conditions at home became too harsh for her, she decided to run away.

Barely into her teens, alone and without any money, the young girl met two boys who promised to help her find a job as a "hostess" in Kosovo. Their only condition was that she had to do everything they told her, no questions asked. In Kosovo, the job never materialized. Instead, she was forced to work as a waitress in a local hotel and disco, and to steal and push drugs. When she tried to refuse and escape, the boys threatened Ana with violence.

The trio was discovered by the authorities in Kosovo and sent back to Albania, where Ana was then forced into sex work.

Ana eventually escaped her captors and went to the police, who referred her to Different and Equal (D&E), an Albanian NGO established in 2004 to provide services for the protection and social reintegration of victims of abuse, exploitation and trafficking. Through a project funded by the United Nations Voluntary Trust Fund for Victims of Human Trafficking in 2011, the NGO provides sustainable reintegration assistance for Albanian victims of trafficking and those at risk of being trafficked.

Ana was 15 years old when she arrived at the shelter, joining a group of other young teenage girls, almost all of whom were rescued from similar dire circumstances. At the centre, she underwent a health assessment, including tests for sexually transmitted infections. She also received psychological counselling. Ana was re-enrolled into school part time in order to complete her elementary studies. She has also completed courses in computing, English, hairdressing and beauty.

According to UNODC, at any given time, human trafficking traps an estimated 140,000 victims across Europe in a vicious cycle of violence, abuse and degradation. Albania continues to be a source country for men, women and children trafficked for the purposes of sexual exploitation, forced labour and begging.

To date, D&E has assisted 38 rescued victims of human trafficking and 12 of their children. Rescued survivors receive accommodation, protection, and medical and psychological assistance. The NGO provides legal support to allow victims to seek justice, and facilitates their return to school, to improve life skills through vocational training and even to get legal employment.

The United Nations Voluntary Trust Fund for Victims of Human Trafficking, managed by UNODC, was launched in 2010 by Secretary-General Ban Ki-moon, and through its Small Grants Facility supports the provision of on-the-ground humanitarian, legal and financial aid to victims of trafficking. In July 2011, the Small Grants Facility awarded funding to 11 organizations working with survivors of human trafficking around the world.