Canada contributes over US$ 1.3 million to UNODC synthetic drugs programme 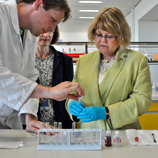 29 June 2012 - The Government of Canada has stepped up its support for the UNODC Global Synthetics Monitoring: Analyses, Reporting and Trends (SMART) programme with a latest contribution of $854,531 to bring the total to over US$1.3 million for the period 2011- 2013.

The SMART programme works to enhance the capacity of Member States in priority regions to generate, analyze, report and use information pertaining to synthetic drugs. The programme is particularly important given the continuously increasing figures for manufacture of ATS since 1990 and the rapidly changing nature of ATS markets. A priority region in these efforts is Latin America and the Caribbean, of which the Government of Canada is a key partner.

The 2012 World Drug Report, released on Tuesday, revealed that while the use and global seizures of amphetamine-type stimulants, the second most widely used drugs worldwide, remained largely stable, in 2010, methamphetamine seizures (45 tons) more than doubled those of 2008 (21.5 tons), due to significant seizures in Central America and East and South-East Asia.

The report showed that in Central America, annual prevalence of ATS use had been reported to be higher than the global average, with particular concern over rising levels of the use of synthetic drugs such as "ecstasy" among South American youth and prevalence of the use of stimulants including amphetamine and "ecstasy" among young people particularly in Argentina, Chile, Colombia and Uruguay.

Speaking at the meeting with Hon. Ablonczy, Mr. Chawla said, "the threat of synthetic drugs is one of the most significant drug problems worldwide. The expansion of illicit trade in such substances and the high profits generated by that trade pose an increasing threat to security and health worldwide". Mr. Chawla added that through the Global SMART Programme, countries would be better able to identify trends in synthetic drug manufacture and use, which would assist them in developing effective policies and programs.

Since 2011 when the Global SMART programme started activities in the Latin America region, a preliminary assessment on the ATS situation in Latin America has been produced. A first regional SMART workshop in Latin America was also organized in close cooperation with the Organization of American States (OAS).

Honourable Ablonczy recognized the importance of such cooperation, saying: "promoting regional and international cooperation is critical to the prevention and suppression of illicit drug trafficking." She added that UNODC is a capable partner in the fight against transnational organized crime and the Global SMART Programme continues to be an effective tool for governments to better understand and address the threat of synthetic drugs.

Mr. Chawla thanked the Government of Canada for the funding support: "the generous funding is a clear demonstration of Canada's commitment to the fight against transnational organized crime".

Canada is a major UNODC donor and supports a wide range of capacity building initiatives aimed at reforming the security sector, combating illicit drug trafficking, as well as addressing corruption, money laundering and human smuggling in different regions of the world.