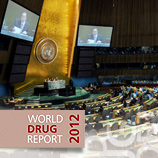 22 June 2012 -The General Assembly will hold a thematic debate on drugs and crime as a threat to development on Tuesday 26 June in New York.

The event, convened on International Day against Drug Abuse and Illicit Trafficking, highlights the impact of drugs and crime on poverty alleviation and the Millennium Development Goals, and discusses ways of improving the international community's coordinated efforts to address the adverse impact of drugs and crime on development. Two panel discussions will focus on challenges in mainstreaming drug control and crime prevention into development initiatives.

The thematic debate will be chaired by the President of the 66th General Assembly, Nassir Abdulaziz Al-Nasser, and will be attended by, among others, Secretary-General Ban Ki-moon and leading international actors engaged in drug and crime prevention efforts.

The webcast of the event will be streamed on Tuesday 26 June from 10 am to 1pm (first session) and from 3pm to 6pm (second session) EST through http://webtv.un.org/.

For all the highlights from the 2012 World Drug Report follow UNODC on Twitter (@UNODC) and join the conversation by using #WDR2012.

List of participants, background and programme of the thematic debate