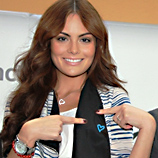 1 March 2012 - Ximena Navarrete, Miss Universe 2010 and native of the Mexican state of Jalisco, has declared her support for the UNODC Blue Heart Campaign against Human Trafficking. "Humans are not for sale, either in Jalisco or anywhere else in the world", said Navarrete on taking up her awareness-raising role, which is targeted at young people and families in her home state.

Long involved in causes to help children, the group most at risk of falling prey to traffickers, she said: "It hurts me to know that more than 20,000 Mexican children are victims of sexual exploitation, especially in our tourist resorts."

The campaign aims to rally world public opinion against human trafficking and make the Blue Heart an international symbol of the fight against that crime. "Ximena cares deeply about children who are abused in this way," said Antonio Mazzitelli, Regional Representative of UNODC. "We are fortunate to have such a prominent spokesperson to defend children from the unacceptable evil of sexual exploitation."

Mexico is increasingly taking steps at the federal, state and municipal levels to comply with the National Programme against Human Trafficking launched by President Felipe Calderón in January 2011, including by expanding the Blue Heart Campaign. In Latin America, Brazil, Chile and Costa Rica are looking to emulate the Mexican campaign model. Further afield, Belgium, Colombia, Lebanon, Serbia and Spain have demonstrated their support for the campaign, with Portugal to follow shortly.

Navarrete took part in a ceremony organized by the Family Development Agency (DIF), an initiative led by the First Lady of Mexico to carry out awareness-raising activities aimed at preventing human trafficking within the framework of the Blue Heart Campaign. The ceremony fittingly took place in the "Trompo Mágico", a museum devoted to childhood, which welcomed more than 30 children from shelters in the city of Guadalajara, Jalisco.

Jalisco has drafted a law against human trafficking, which is expected to be adopted in the coming weeks. The law will enable the state to develop its capacities to prevent human trafficking, prosecute the criminals involved and protect victims. Last year, DIF Jalisco targeted athletes and tourists with an awareness campaign against the sexual exploitation of minors during the Pan-American Games held in Guadalajara.

The General Director of DIF Jalisco, Felipe Valdez de Anda, chaired a panel discussion held during the ceremony, which also saw the participation of Lourdes Gutiérrez Ortiz-Monasterio of the Federal Inter-Secretariat Commission, and Imelda Guzmán de León, President of the DIF Volunteers Network.