Turning the tide for Afghan women and girls who use drugs 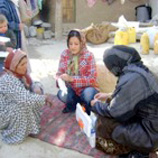 27 March 2012 - Until 2009, available data showed Afghanistan as a country with a low HIV prevalence rate. However, research conducted in Kabul, Herat and Mazar-e-Sharif in 2009 showed an average HIV prevalence of 7.1 per cent among people who inject drugs. Of one million drug users, 110,000 of whom are female, only 10 per cent have access to treatment services.

Since 2008, UNODC, through its country office in Afghanistan, has supported HIV services for some of the most marginalized women in the country - women drug users and women prisoners.

UNODC, with the support of national stakeholders and local non-governmental organizations, has so far reached over 3,000 women who use drugs and close to 1,000 of their spouses who also use drugs. More than 80 women staff members of local partners, including doctors, nurses, social workers, outreach workers and peer educators, have been at work across six provinces in Afghanistan to ensure service delivery reaches those most at risk.

In community sites, around 4,000 women and girls have availed themselves of voluntary counselling and testing services, while thousands received HIV prevention tools. Other services provided include diagnosis and treatment of sexually transmitted infections and tuberculosis, referral to antiretroviral treatment and prevention of mother-to-child HIV transmission.

In Kabul, UNODC works with Nejat, a local organization, to offer drug dependence treatment services. The Nejat Centre, based in the old part of Kabul, attends, inter alia, to the needs of women and girls who use drugs by injection, non-injecting drug users and those whose spouses also inject drugs. In addition, a mobile unit assists those persons by providing them with prevention tools, offering daily gender-responsive services.

The UNODC office in Afghanistan interviewed Waheeda, a local mother of four who started using drugs in her early twenties after she got married. With little access to information or help, she used drugs for twelve years (through four pregnancies) before finally getting help at the Nejat Centre.