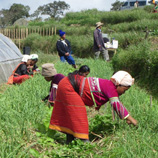 8 March 2012 - Today, the world marks International Women's Day, the theme for this year being "Empower rural women - end hunger and poverty". UNODC is working with rural women in parts of Asia and Latin America to equip them with knowledge relating to sources of livelihood that are alternatives to the cultivation of illicit crops used in the manufacture of illegal drugs, such as heroin and opium, to address drug abuse and HIV and to protect the environment.

Rural women play a critical role in global development - they enhance agricultural and rural growth, improve food security and can help to reduce poverty levels in their communities. In some parts of the world, women represent 70 per cent of the agricultural workforce, accounting for 43 per cent of agricultural workers worldwide, according to the United Nations. Yet rural women face many obstacles, including lack of proper health care, limited resources, illiteracy, hunger and poverty.

In his message for the day, Secretary-General Ban Ki-moon said: "Rural women and girls - to whom this year's International Women's Day is devoted - make up one quarter of the global population, yet routinely figure at the bottom of every economic, social and political indicator, from income and education to health to participation in decision-making."

In Bolivia, UNODC and the Ministry of Rural Development are running a project called Jatun Sach'a to promote sustainable use of natural resources in the tropics of Cochabamba and the Yungas region of La Paz. Some 4,200 families have already benefited from the initial phase of the project, while the second phase is expected to benefit more than 12,000 families. The project has particularly benefited women, who were trained to use local plants and vegetables to create products that enhance food security and improve nutrition in farming communities. Armed with their new knowledge, the women won first prize at the Third Organic Fair, sponsored by the municipality of La Asunta.

In Thailand, UNODC is working with the ethnic Tai Yai hill tribe from Huay Nam Koon Village in northern Thailand to implement a project known as the Pang Mahan Reforestation Project. This restoration project is helping the tribe to shift away from cultivating opium poppy by providing agricultural assistance, market access support and infrastructure enhancement for the farmers, many of whom are women.

Since 2008, UNODC has supported the provision of HIV services to the most marginalized women in Afghanistan - those who use drugs in rural areas. The organization supports six community sites in the provinces of Herat, Nangarhar, Badakhshan and Balkh. UNODC, with the support of national partners and female outreach workers, has to date assisted more than 3,000 female drug users and almost a thousand women whose spouses use drugs. At the community sites, the women receive voluntary HIV counselling and testing services, prevention tools, diagnosis and treatment of sexually transmitted infections and tuberculosis, antiretroviral treatment and prevention of mother-to-child HIV transmission services.

In Bangladesh, UNODC has supported the establishment of four drop-in centres that provide services to more than 3,000 women, two of those centres providing assistance to women in rural areas of the districts of Gazipur and Bogra. The centres offer gender-responsive services to female drug users, particularly injecting drug users and females with partners who use drugs.

"On this International Women's Day, I urge Governments, civil society and the private sector to commit to gender equality and the empowerment of women as a fundamental human right and a force for the benefit of all. The energy, talent and strength of women and girls represent humankind's most valuable untapped natural resource," said Secretary General Ban Ki-moon.

UNODC and HIV and AIDS