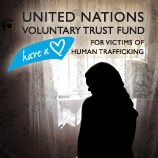 5 June 2012 - When Dana read an advert from a travel agency inviting women from the Republic of Moldova to spend a summer in Italy working as waitresses in a nightclub, she did not think twice about seizing the opportunity. The 19-year-old had long dreamed of going to Italy; now she could do so - and even earn good money. Dana responded to the ad and soon after made the fateful journey from her country, nestled between Ukraine and Romania, west to Italy. Upon arrival, Dana found herself trapped in a nightmare.

Locked up, deprived of food and forced into prostitution, Dana became one of the estimated 2.4 million people who are trapped in modern-day slavery at any given time. Caught in a web of sexual exploitation, she constantly feared for her life.

After she had endured months of such torture, in a rare stroke of luck, police freed Dana during a raid on a brothel where she worked. She was sent back to the Republic of Moldova.

Once safely home, Dana turned to a local NGO, the Institute for Democracy, to find out more about her rights - and to make sure she never found herself in that horrific situation again.

As part of its objectives, the Institute for Democracy works to protect human rights and fights trafficking in persons and violence. In 2011, the NGO, supported by funding from the United Nations Voluntary Trust Fund for Victims of Trafficking in Persons, launched a project to provide legal assistance to human trafficking victims such as Dana. As part of the project, the NGO opened a centre for legal assistance for trafficking victims in Comrat, as well as a legal hotline for victims.

The centre provides on-site legal advice to human trafficking victims, or their families or friends, and runs the hotline in collaboration with a local lawyer's office, through which victims are advised anonymously and free of charge. It also works to prevent human trafficking by providing information about the risks of accepting employment abroad and steers potential recruits away from dubious ads and opportunities that sound too good to be true.

From the time of its inauguration in mid-November last year until the end of February, the centre had counselled 84 people, and the hotline had received 64 calls.

The Institute for Democracy's legal assistance has helped to reintegrate Dana into the community and has facilitated her access to the psychological help she needs to heal.

Through its work directly with and on behalf of victims, the centre is an important element in combating trafficking in persons originating in that country, which is among the world's primary countries of origin of human trafficking victims.

The United Nations Voluntary Trust Fund, managed by UNODC, was officially launched in 2010 by Secretary-General Ban Ki-moon and, through its Small Grants Facility, supports the provision of on-the-ground humanitarian, legal and financial aid to victims of trafficking. The Institute for Democracy is one of the 12 organizations that received funding in October 2011 through the Trust Fund's Small Grants Facility.