The fate of smuggled migrants: Confronting violence and exploitation 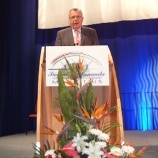 21 November 2012 - UNODC's Executive Director, Yury Fedotov, spoke this week on combating violence against migrants, migrant workers and their families at the Sixth Summit of the Global Forum on Migration and Development (GFMD) - the informal, Government-led initiative addressing interconnections on these key global issues. The event was also addressed by Peter Sutherland, the Secretary-General's Special Representative for Migration and Development who delivered a speech on behalf of the UN chief.

Mr. Fedotov, who is also the current Chair of the United Nations inter-agency Global Migration Group, voiced his concern that one of the most troubling aspects of international migration is the very many forms of violence directed against migrants globally: "Migrant workers, for example, often face dangerous working conditions, workplace harassment, or lack of adequate social protection. Irregular migrants are particularly vulnerable to becoming victims of human trafficking and of forced labour with traffickers exploiting vulnerable individuals by putting them in slave-like conditions and victims being physically, psychologically or sexually abused".

It was noted that problems for migrants often start in countries of origin where leaving may be the only available option in order to escape wars, violence, discrimination, persecution or environmental devastation. Human rights violations often accompany the migration process and migrants can experience many forms of harm, including violence, blackmail, lack of food and water, rape and even death during their journey. When migrants reach their final destination, they can remain exposed to areas such as discrimination and xenophobia.

In a bid to respond to these and related issues, the GFMD, which was formed in 2007 and is chaired by the Government of Mauritius this year, works to advance understanding and cooperation on the relationship between migration and development, as well as pursue practical action. Likewise, the Global Migration Group - of which UNODC assumed the Chair in July 2012 - brings together heads of UN and international agencies to promote the wider application of all relevant international and regional instruments and standards relating to migration. Through this mechanism, the Group encourages the adoption of more coherent, comprehensive and better coordinated approaches to the issue of international migration.

The UNODC Executive Director concluded his speech by noting six actions needed to improve the safety of migrants: