Human trafficking under spotlight at Conference of Parties meeting 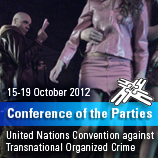 17 October 2012 - Traffickers in human beings make an estimated $32 billion annually in an illicit market that affects millions of victims worldwide every year. On the margins of the sixth session of the Conference of the Parties to the United Nations Convention against Transnational Organized Crime, intergovernmental agencies, NGOs and government representatives discussed progress made and shared best practices and challenges in fighting one of the world's most shameful crimes and one that robs people of their dignity and basic rights.

A State Secretary of Mexico,  Alejandro Poiré Romero, while presenting Mexico's security strategy for combating organized crime, gave an update of the Mexican Government's progress with the Blue Heart Campaign against trafficking in human beings. Mexico was the first country to adopt the campaign (Campaña Corazón Azul) in April 2010 to raise awareness about trafficking in human beings. Since the launch, the campaign has held a number of awareness- raising activities.

UNODC launched an issue paper on clarification of the meaning of "abuse of a position of vulnerability" within the definition of trafficking in persons in the Trafficking in Persons Protocol.

Other related events taking place during the week included a discussion on how NGOs are offering assistance to States in the implementation of the Organized Crime Convention, in particular the Trafficking in Persons Protocol, and discussions on the challenges of researching trafficking in human beings and new technologies for use in preventing it.

In June, UNODC launched a new global awareness-raising campaign that highlights some of the key threats being faced today - with trafficking in human beings one of the leading concerns. The campaign, which can be seen at www.unodc.org/toc, includes a new video ( www.youtube.com/unodc).

Towards the end of 2012, UNODC will publish a new global report on trafficking in persons. Based on data collected from Member States, the report will provide a basis for evaluating how trends have changed since the last global UNODC data-collection exercise in 2009 and will provide guidance as to what remains to be done.

UNODC also manages the United Nations Voluntary Trust Fund for Victims of Trafficking in Persons. Especially Women and Children. Officially launched in 2010 by Secretary-General Ban Ki-moon, the Trust Fund supports the provision of on-the-ground humanitarian, legal and financial aid to victims of trafficking and provides members of the public an avenue through which they can donate to this important cause.

Since the launch in 2008 of the UNODC Blue Heart Campaign, a number of countries have adopted the campaign nationally to spread awareness on the dangers of trafficking in human beings. Serbia and Switzerland are the latest countries to adopt the campaign, joining Lebanon, Mexico, Portugal and Spain.