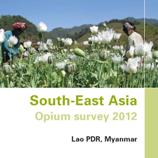 31 October 2012 - Opium poppy cultivation in Myanmar rose for the sixth consecutive year, despite a significant increase in Government eradication efforts, according to a new UNODC report.

"The opium numbers continue to head in the wrong direction", said Gary Lewis, UNODC Regional Representative for East Asia and the Pacific. "However, we have seen more progress on responding to the root causes of opium cultivation in the past year than we have in the past decade. The international community must now ask 'how can we help?', and provide resources towards a solution."

Speaking from Bangkok, Mr. Lewis placed the report's key findings within the context of overall regional drug control: "The significant increase in opium poppy cultivation in Myanmar, coupled with significant increases in trafficking in methamphetamines and other illicit drugs, reflect a growing human security threat to the region," he said.

"Despite the increase in eradication, what really matters is the increase in cultivation. Cultivation indicates intention and, unless the farmers have a feasible and legitimate alternative to give them food security and reduce their debt, they will continue to plant poppy."

Myanmar is South-East Asia's largest opium poppy grower and the world's second largest after Afghanistan. According to UNODC, it currently accounts for 25 per cent of global illicit poppy cultivation and, together with the Lao People's Democratic Republic, a full 10 per cent of global opium production. UNODC estimates that Myanmar's total 2012 opium production is currently 690 tons, a 13 per cent increase from 2011 and the highest level since 2003.

The centre of Myanmar's illicit drug activities remains Shan State, which accounts for 90 per cent of opium poppy cultivation in the country, with the remaining 10 per cent mainly in Kachin State. In 2012, strong increases in cultivation were reported by UNODC in South, East and North Shan States, as well as in Kachin.

UNODC also estimates that 300,000 households in Myanmar engage in opium cultivation, a 17 per cent increase from 2011 (256,000 households). Both Shan and Kachin States have areas of ongoing instability.

Speaking from Naypyitaw at the launch, Jason Eligh, the UNODC country manager in Myanmar, noted: "Eradication alone is not an effective response to reduce opium poppy cultivation.  We must remember why farmers grow poppy. In most cases it is because they need cash to buy food to feed their families. Growing opium poppy provides much-needed food security for many of them."

Mr. Eligh elaborated further: "In areas of instability like Shan and Kachin States, with poor access to markets, there are few employment alternatives to poppy. A sustainable long-term solution to poppy can only come through significant investment in stability, the rule of law and alternative development."

In Myanmar, opium cultivation took place in 37 per cent of villages surveyed in 2012, with relatively high concentrations in South Shan (48 per cent) and East Shan (43 per cent).  When asked why they grow opium, 79 per cent of respondents said it was because of the high net income generated by poppy relative to other crops, while 45 per cent cited the need to buy food. In addition, 95 per cent of villages in Shan State said they received no agricultural assistance.

Opium prices increased in Myanmar in 2012 to $520/kg, a 15 per cent increase from 2011 ($450/kg). This reflects the strong appreciation of the kyat, Myanmar's currency, against the United States dollar. Overall, the report finds that the price of opium, adjusted for inflation, has remained stable since 2006.