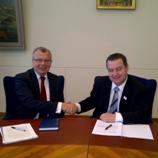 24 October 2012 - During a visit to Serbia this week, UNODC Executive Director Yury Fedotov met with several leaders to discuss issues related to transnational organized crime, corruption and illicit drugs. While in the capital, Belgrade, the United Nations anti-drug and -crime chief met with Serbia's Prime Minister/Minister of Interior, Ivica Dačić, as well as other key officials, including the Minister of Justice and Public Administration, Nikola Selaković, the Minister of Health, Slavica Djukic Dejanovic, and representatives from the Anti-Corruption Agency and the Ministry of Foreign Affairs.

Speaking after the meetings, Mr. Fedotov noted that Serbia is an important partner within the UNODC regional programme for South-Eastern Europe, which was launched in May 2012: "This programme is an institutional priority for UNODC and is built around strengthening law enforcement, improving justice and integrity in the region, and helping counter drug use and drug trafficking, the latter with a particular focus on countering Afghan heroin going through the Balkan route".

At the different meetings Mr. Fedotov attended, he discussed several key areas in which UNODC is working with the Serbian Government.

As part of the regional programme, UNODC, the International Organization for Migration and the Office of the United Nations High Commissioner for Refugees are rolling out a joint campaign in the country against trafficking in human beings, under the banner of the Blue Heart Campaign. Other work in this area has included issues such as judicial, prosecutorial and police training, provision of court equipment to help in prosecutions, and assistance in streamlining legislative tools to tackle this crime.

On drug use prevention, treatment and care, the Executive Director acknowledged the Government's efforts in tackling a number of cross-cutting issues, including health-related challenges and improved availability of services. He also discussed UNODC's ongoing work in Serbia in the areas of prevention and treatment of drug use, as well as of HIV and AIDS, and invited closer cooperation.

Discussing anti-corruption initiatives in the country, Mr. Fedotov noted that Serbia is currently taking part in the Mechanism for the Review of Implementation of the United Nations Convention against Corruption. UNODC, along with the World Bank, has additionally been providing anti-corruption capacity-building and training assistance to Serbia through the Stolen Asset Recovery (StAR) Initiative.

Mr. Fedotov also covered mutual legal assistance in his meetings, where he expressed UNODC's willingness to support the Government in developing a national strategy on support and assistance for victims.