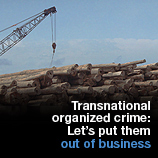 13 September 2012 - Environmental crime, particularly trafficking in wildlife and timber, is a significant source of illegal income for criminals. For example, estimates place the trade in illegal timber from South-East Asia to the European Union and Asia in 2010 at $3.5 billion, while the sale of elephant ivory, rhino horn and tiger parts in Asia alone was worth $75 million in the same year. As a form of transnational organized crime, trafficking in wildlife and timber forms is the subject of a new campaign by the United Nations Office on Drugs and Crime (UNODC).

Information on the awareness campaign, which aims to draw attention to the various aspects of transnational organized crime, can be found at www.unodc.org/toc and includes a video available at www.youtube.com/unodc and through international broadcasters. The website and video illustrate the key financial and social costs of organized crime, including environmental crime.

Like trafficking in illegal drugs, weapons and persons, the illicit trade in wildlife and timber has negative consequences for security and development. Particularly acute in developing countries, it fuels corruption, since the traffickers involved often rely on fraudulent paperwork from corrupt government officials to move products across borders.

Environmental crime leads to irreversible environmental damage through practices such as illegal logging. It also has a negative impact on the tourism trade, which is a key part of many national economies in Africa and South-East Asia, as a result of depletion of natural resources and the violence that arises from illegal activities such as poaching. As a consequence of less tourism and more environmental damage, local communities lose their livelihoods.

In the illegal wildlife trade, elephants, rhinos and tigers are the endangered species most commonly killed for their skins and bones. Ivory, rhino horn and tiger parts are among the most popular large animal "commodities" trafficked from various parts of South-East Asia and Africa to Asia to satisfy a lucrative overseas market for exotic animal products. To illustrate the enormous impact of this illegal trade, there are now only around 3,200 tigers left in the wild, down from an estimated 100,000 at the beginning of the twentieth century. Numerous smaller wild species are also "harvested" for traditional medicine or captured live for the pet trade.

South-East Asia, home to some 7 per cent of the world's ancient forests and many unique tree species, is experiencing the fastest deforestation rate on Earth owing to illegal logging, which is leading to irreversible environmental damage. Most of the illegally produced timber, particularly from Indonesia, makes its way to the European and Asian markets. The EU has been estimated to import some 20 per cent of the world's illegally felled timber, and China some 25 per cent.

Tackling environmental crime requires a coordinated global response and use of proper tools of law enforcement throughout the criminal justice system. Developing countries need to be assisted to provide decent livelihood opportunities for marginalized groups forced by poverty and exploitation to turn to wildlife poaching, illegal logging and other forms of wildlife crime.

In 2010, UNODC joined forces with five other organisations to launch the International Consortium on Combating Wildlife Crime (ICCWC) which works to bring coordinated support to national wildlife law enforcement agencies and related subregional and regional networks that act in defence of natural resources. One product of that alliance is the Wildlife and Forest Crime Analytic Toolkit, which helps governments to identify challenges and strengthen their criminal justice responses to wildlife and forest crime. In Indonesia, UNODC is working to break the link between illegal logging and corruption. UNODC is helping to strengthen the capacity of Indonesian law enforcement and criminal justice officials to investigate and prosecute forest crimes and related corruption cases.

The public can also play a role in fighting environmental crime. Consumers can help to reduce demand for illegal wildlife and timber products by being aware of species under protection and paying careful attention to labelling when buying timber products. Tourists should choose their destinations carefully and support ecotourism efforts, including those ensuring that no animals or wildlife products are taken home by tourists.

Companies also have an important role to play by ensuring that any timber and wood products they buy are of legal origin, they ensure less revenue for traffickers and therefore less deforestation.

Transnational organized crime campaign: Let's put them out of business