Social Good Summit 2012: "To be socially good, we need to be good socially" 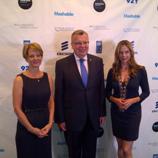 24 September 2012 - From 22 to 24 September, the annual Social Good Summit is being held in New York. Coinciding with the United Nations General Assembly, which opened this past week, the Social Good Summit is presented by a variety of industry, performing arts and development leaders, bringing together members of the private and public sectors to discuss the role of technology in social advancement.

Under the banner "Digital. Global. Action", the Social Good Summit has attracted a host of personalities to discuss a range of themes. During Sunday evening's session, Academy Award winner and UNODC Goodwill Ambassador for Human Trafficking Mira Sorvino and Yury Fedotov, Executive Director of the United Nations Office on Drugs and Crime, took part in a discussion about human trafficking. Joined by Laurie Bolthouse, the producer of the upcoming anti-trafficking feature film Trade of Innocents, which will premiere in New York on 27 September and stars Ms. Sorvino, the session offered an insight into one of today's most shameful crimes and how technology is helping to spread awareness and combat it.

Speaking at the session, Mr. Fedotov noted that "to be 'socially good', we need to be 'good socially'. This means focusing on technology, social media and traditional media to raise awareness and promote our strategies to confront human trafficking and the criminals."

For more than a decade, UNODC has been using technology to build awareness of human trafficking. In the early 2000s, the organization produced a series of public service announcement (PSA) videos to educate people about issues such as sexual exploitation, child trafficking, domestic servitude and forced labour, four of the key areas of human trafficking. These PSAs have been aired on a range of international and national TV networks and continue to be viewed through the UNODC website and on YouTube as technology advances.

In recent years, social media has arguably had the biggest impact on driving forward messages concerning human trafficking and giving people the power to learn more about the organizations working to tackle this crime. Campaigns led by MTV Exit, Stop The Traffik, the International Organization for Migration and the Polaris Project, among many others, have demonstrated the power of such efforts. The UNODC Blue Heart Campaign against Human Trafficking has been actively involved in using social media, in particular Facebook and Twitter, to get messages across. From the initial Facebook groups and then Facebook pages (in English and Spanish) and Twitter, the online campaign resources of UNODC facilitate the dissemination of anti-trafficking messages in a far wider manner than ever before.

The latest PSA and campaign of UNODC on transnational organized crime has also helped raise the profile of human trafficking, one of the core areas within transnational organized crime. Launched in July 2012, the video has so far been viewed more than 60,000 times online and is being aired on major international networks such as Bloomberg, Deutsche Welle, Vox Africa and Televisión Española. The video will be shown at this year's pre-Oscar screening sessions hosted by Variety magazine in New York and Los Angeles, with further broadcasting planned via other international media, including CNBC. With accompanying online materials, the campaign leverages the Internet and social media to promote the message that we need to tackle the criminal networks behind this crime.