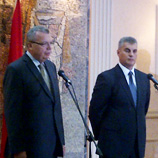 5 September 2012 - UNODC Executive Director Yury Fedotov has paid his first official visit to Montenegro, during which he met with Prime Minister Mr. Igor Lukšić, Deputy Prime Minister and Minister for Justice Mr. Duško Marković, Minister of the Interior Mr. Ivan Brajović and Minister of Health, Mr. Miodrag Radunovića. During the visit, Mr. Fedotov discussed ways in which UNODC could collaborate with the Government of Montenegro in fighting drug trafficking and other forms of organized crime.

UNODC is currently working in Montenegro to support activities relating to drug abuse prevention and treatment, container control and the combating of corruption. The Executive Director said that UNODC would be willing to further assist the Government in countering drug trafficking, money-laundering and organized crime.

Montenegro is one of the countries of South-Eastern Europe that lie on the so-called "Balkan route", which is used for trafficking drugs from Afghanistan to Europe. According to UNODC, around 80-85 tons of heroin was trafficked to South-Eastern Europe in 2009. Most of the drugs trafficked along the route continue onwards to the lucrative markets of Western Europe. Cocaine is also smuggled by sea and air from South America to Montenegro with the increased involvement of Montenegrin nationals, including seamen, as organizers or couriers.

At a meeting with the press in Podgorica, Mr. Fedotov recognised the important role that Montenegro can play in fighting the illicit drug trade, particularly within the framework of the UNODC Regional Programme for South-Eastern Europe, which was launched in May. The regional programme works to help governments in the region to counter drug trafficking and organized crime, enhance integrity and justice and provide treatment and care for drug abusers, including those infected with HIV/AIDS. The programme further aims to promote regional cooperation, including with the European Union and regional bodies.

Mr. Fedotov announced that UNODC and the World Customs Organization (WCO) were preparing to launch the UNODC-WCO Container Control Programme in the Montenegrin port of Bar and the port of Durres, Albania, to enhance security in the containerized trade supply chain. Albania and Montenegro are the first countries of South-Eastern Europe to join the Container Control Programme and the first training session for  officers will take place in Durres from 10 to 14 September.

Within the next few weeks, UNODC will be participating in a drug law enforcement mission to the Balkans, including Montenegro. It will support interregional and intraregional law enforcement cooperation, assess training needs and build new components of the regional programme.

"Our response has been to promote shared responsibility among the international community. UNODC promotes political commitment at the highest levels while tailoring projects that deliver results at the field level," said the UNODC chief. He called on the Government of Montenegro to make the fullest use of the expertise of UNODC, which could work as a partner in the implementation of European Union projects aimed at drug control and other mandated areas.