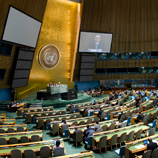 24 September 2012 - The rule of law is central to the work of the United Nations. Today in New York, the General Assembly held the first-ever high-level meeting devoted to the subject of the rule of law, which is also a priority for the Secretary-General.

The high-level meeting, under the theme "Delivery of justice", was addressed by the newly sworn-in President of the sixty-seventh session of the General Assembly Mr. Vuk Jeremić, Secretary-General Ban Ki-moon, the United Nations High Commissioner for Human Rights Navanethem Pillay, the Administrator of the United Nations Development Programme Helen Clark and UNODC Executive Director Yury Fedotov, among other high-level United Nations representatives.

Addressing the meeting, UNODC Executive Director Yury Fedotov said: "We need to develop a collective vision of what a criminal justice system in the early twenty-first century looks like. UNODC believes that such a system must be informed by international human rights standards delivering fair, effective and humane criminal justice policies."

The meeting provided a unique opportunity for Member States to reaffirm their commitment  to the rule of law on the basis of the United Nations Charter as an essential framework for political dialogue and cooperation.

While the work of the United Nations to promote the rule of law extends to more than 150 countries, establishment of the rule of law is particularly critical in conflict and post-conflict societies. The strengthening of the rule of law at national and international levels is essential for the achievement of sustained economic growth, sustainable development, the eradication of poverty and hunger and the protection of all human rights and fundamental freedoms.

The proposed outcomes of the high-level meeting include the adoption by the General Assembly of a five-year programme of action to strengthen the rule of law, particularly in the context of the interconnected threats of organized crime and trafficking and of conflict and terrorism, which undermine international security and development.

UNODC seeks to achieve security and justice for all by helping Member States and their peoples to protect themselves against the threats posed by drugs, crime and terrorism. The work of UNODC is guided by a broad range of international legally binding instruments, such as the United Nations Convention against Transnational Organized Crime and the United Nations Convention against Corruption, and by various United Nations instruments and standards relating to crime prevention and criminal justice.

Sixty-seventh session of the General Assembly of the United Nations