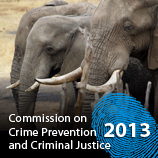 23 April 2013 - ﻿﻿At the current Commission for Crime Prevention and Criminal Justice (CCPCJ), the heads of two United Nations bodies called on countries to recognize wildlife and forest crimes as a serious form of organized crime and strengthen penalties against criminal syndicates and networks profiting from such illegal trade.

Following a side-event at the CCPCJ on this issue, Yury Fedotov, Executive Director of the United Nations Office on Drugs and Crime (UNODC), and John E. Scanlon, Secretary-General of the Convention on International Trade in Endangered Species of Wild Fauna and Flora (CITES), urged the international community to intensify its response to this international criminal activity, particularly in the areas of legislation, law enforcement, criminal analysis and international cooperation.

The call comes as figures continue to show the growing impact of this multibillion dollar a year market and its devastating impact on the planet's biodiversity. According to the latest UNODC report on transnational organized crime in East Asia and the Pacific which was released last week, the total value of the illegal wildlife trade in this region is estimated at some $2.5 billion, while the illegal trade in wood-based products is worth $17 billion. Juxtaposed against the entire region's illicit market of $90 billion, this represents a sizeable amount which is comparable to the trafficking of people, drugs and counterfeit goods.

"In many cases, inadequate laws and sanctions, under-resourced and weak capacities in law enforcement and lack of coordination between competent authorities are being exploited by criminal networks. In the race against the extinction of key species and vital forestry, we need to focus on capacity-building to strengthen responses to this global threat", said Mr. Fedotov.

This was echoed by Mr. Scanlon who said: "to seriously combat these crimes the entire 'enforcement chain' must work together to ensure seizures lead to investigations, prosecutions and convictions. This necessitates treating them as serious crimes, making better use of forensics and utilizing the sorts of techniques used to combat illegal trade in narcotics. More aggressive enforcement actions, especially targeted at the high-level end of the criminal chain - or the kingpins - are needed."

"We are working collaboratively across source, transit and destination countries, and with key agencies, such as UNODC and other ICCWC partners, to respond in a manner that is commensurate with the serious risk to wildlife and to people", he added.

Aside from the destruction that wildlife and forest crime has on biodiversity, it simultaneously fuels other crimes such as money-laundering, financing of non-state actors, murder and extreme violence.

Mr. Fedotov and Mr. Scanlon called for greater ratification and better implementation of two key conventions which offer coordinated, global responses to these crimes, namely CITES and the United Nations Conventions against Transnational Organized Crime. Mr. Fedotov also underlined the importance of making wildlife and forest crimes punishable by imprisonment of four years or more in national legislation - a move that would ensure the Convention against Transnational Organized Crime can be used to tackle criminals within this area.

On an operational level, UNODC and CITES, along with INTERPOL, the World Customs Organization (WCO) and the World Bank, are part of the International Consortium on Combating Wildlife Crime (ICCWC) - a joint partnership working to bring coordinated support to Governments, national wildlife and forest law enforcement agencies and sub-regional networks to protect the world's natural resources from criminal exploitation.

Another key aspect of wildlife and forest crime is the need to tackle corruption. UNODC's anti-corruption activities are founded on the UN Convention against Corruption. The ratification and full implementation of this Convention enables prevention measures, the criminalization of various forms of corruption, as well as the  recovery of proceeds and assets. A UNODC publication 'Corruption, Environment and the United Nations Convention against Corruption', indicates the impact of corruption in this area and highlights the need to integrate anti-corruption strategies in environmental legislation and policies.

Corruption, Environment and the United Nations Convention against Corruption

Programme of Side Events