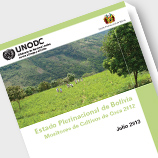 05 August 2013 - The cultivation of coca bush decreased by around 7 per cent in the Plurinational State of Bolivia, according to the 2012 national coca monitoring survey presented today by UNODC and the Bolivian Government. In 2012, the area under cultivation stood at around 25,300 hectares (ha), down from the previous year's figure of some 27, 200 ha. This decline confirms the downward trend noted in 2011, when cultivation fell by 12 per cent since 2010.

Antonino De Leo, UNODC Representative in Bolivia, whose office has been jointly producing the annual survey with the Bolivian Government since 2003, hailed this continuing positive trend.

Satellite images and ground surveys recorded declines in the three largest coca-producing regions: Yungas de La Paz, responsible for just over two thirds of Bolivia's coca cultivation, experienced a 7 per cent decrease to 16,900 ha; Cochabamba Tropics, which accounts for a nearly a third of coca cultivation, registered a 6 per cent reduction to 8,100 ha; and the northern provinces of La Paz, taking a 1 per cent share of cultivation, witnessed a 14 per cent drop to 320 ha.

Decreasing levels of coca cultivation in Bolivia were brought about by a combination of Government-led eradication efforts, as well as dialogue with farmers and social incentives.  In 2012, the Government eradicated some 11,000 ha of coca crop, up 5 per cent over the 2011 figure of 10.500 ha.  At the provincial level, the area cleared in Cochabamba Tropics extended to over 8,200 ha, while the figure reached in the Yungas de la Paz was over 2,500 ha.

Speaking at the press conference, Mr. De Leo encouraged national and local authorities to continue reducing coca crop surplus by further enhancing alternative livelihood and counter-narcotics enforcement programmes.  He added that "UNODC will continue to offer its support to these efforts of the Plurinational State of Bolivia, facilitating and promoting regional and international cooperation for the benefit of the entire society."