On International Migrants Day, UNODC chief says more should be done to stem the tide of tragedy 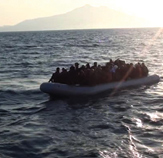 18 December - International Migrants Day serves as a poignant reminder that 2013 was a lethal year for migrants.  Amid recurring accounts of tragedies at sea, in October the international community was particularly shocked when more than 360 migrants from Africa drowned trying to reach the Italian island of Lampedusa. It was the single deadliest migrant shipwreck on record.

UNODC Executive Director Yury Fedotov, whose Office is the guardian of the UN Convention against Transnational Organized Crime and Protocol against the Smuggling of Migrants, recognized that this was a high-profit low-risk activity for criminals.

"Smugglers charge from a couple of hundreds of dollars to $50,000 per person, depending on the journey. According to research by the UN Office on Drugs and Crime, -migrant smuggling from East, North and West Africa to Europe, from Southeast and East Asia to Europe and the Americas and from South to North America - generate around $8.3 billion a year for criminals operating along these routes alone", said Mr. Fedotov.

UNODC works with Member States to help establish legislation and otherwise strengthen and coordinate responses to go after the criminals and tackle migrant smuggling. While 138 States have ratified the Protocol since it came into force nearly a decade ago, there is an urgent need for better protection and more support for smuggled migrants.

"Too often law enforcement responses are limited to border control and intercepting irregular migrants, who may lack the authorization or documents required of the destination country. But such measures do little to deter the smugglers, who are solely motivated by realizing criminal profit and simply adapt their methods and shift routes, potentially making the journey for migrants even more perilous" said Mr. Fedotov, who also noted that criminals took advantage of immigration control, border protection and public security systems weakened by corruption.  "Combating corruption is therefore an essential element of any effective strategy to address migrant smuggling".

Mr. Fedotov urged greater international cooperation to prevent more tragedies: "Stopping migrant smuggling requires comprehensive action, aimed at preventing and disrupting migrant smuggling at the earliest possible stages through better intelligence and building capacities to address the problem. Prevention can only succeed if there is strong cooperation and support between countries of origin, transit and destination".

At a High-level Dialogue on International Migration and Development at the UN General Assembly in October, Member States called for the inclusion of the issue of migration in the post-2015 UN development agenda. They pledged to develop a framework for protecting migrants affected by humanitarian crises and recognized the need to facilitate international cooperation to address the challenges of migration with full respect for human rights.