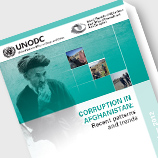 7 February 2013 - Since 2009, Afghanistan has made some tangible progress in reducing corruption in the public sector, as fewer people now report paying bribes. Nonetheless, the total corruption cost has increased by some 40 per cent over the last three years to reach $3.9 billion. Moreover, in 2012, half of Afghan citizens paid a bribe while requesting a public service, says a new joint High Office for Oversight and Anti-Corruption (HOO) and UNODC survey on trends and patterns of corruption in Afghanistan.

Nearly 30 per cent of Afghan citizens paid a bribe when requesting a service from individuals not employed in the public sector of Afghanistan in 2012, as opposed to the 50 per cent who paid bribes to public officials. The national economic impact of non-governmental bribery is also lower, with an estimated total cost of $600 million.

The public sector is most affected by bribery in the western (where 71 per cent of the population accessing public services experienced bribery) and north-eastern regions (60 per cent), while it is least affected in the southern (40 per cent) and central (39 per cent) regions. On the other hand, local individuals and entities not employed in the public sector of Afghanistan, such as village elders, mullahs and Taliban groups, are more involved in bribery in the southern region (nearly 60 per cent of those who had contact with such individuals).

While corruption is seen by most Afghans as one of the most urgent challenges facing their country, it seems to be increasingly embedded in social practices, with patronage and bribery being an acceptable part of day-to-day life. For example, 68 per cent of citizens interviewed in 2012 considered it acceptable for a civil servant to top up a low salary by accepting small bribes from service users (compared to 42 per cent in 2009). Similarly, 67 per cent of citizens considered it sometimes acceptable for a civil servant to be recruited on the basis of family ties and friendship networks (up from 42 per cent in 2009).

The survey was based on a representative sample of 6,700 Afghan citizens aged 18 and above interviewed across Afghanistan. Of the respondents, 42 per cent were women.