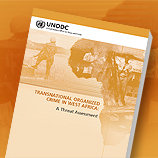 25 February 2013 - While transnational organized crime markets and the vast profits they generate clearly continue to fuel instability and hinder development in West Africa, solid information about these markets is hard to come by. A new UNODC report, Transnational Organized Crime in West Africa: a Threat Assessment, sheds some light on some of the key crime issues that affect the region and provides recommendations for the international community to tackle these problems.

Cocaine trafficking is the most lucrative criminal activity. Although the flow of cocaine through the region has declined to about 18 tons per year in 2010 from a peak of 47 tons in 2007, the profits from this illicit trade may still be larger than the national security budgets of several West African countries.

Cocaine is not the only illicit drug affecting the region, however. One worrying development is the emergence of methamphetamine production and related trafficking. Two methamphetamine labs were detected in Nigeria in 2011-2012, and some 3,000 methamphetamine couriers travelled from West Africa to East Asia in 2010, carrying drugs worth some US$360 million. Moreover, heroin is increasingly detected in the region.

Other criminal markets discussed in the report include the smuggling of migrants from West Africa to Europe, the trafficking of fraudulent pharmaceuticals from Asia to West Africa, and maritime piracy within the region. Although the flow of smuggled migrants into Europe has decreased in recent years as a result of the financial crisis, a steady flow of irregular migrants still make their way north, usually with the help of criminals. Political change in North Africa, as well as increased enforcement efforts in the western areas, have also shifted routes eastwards.

As for the trafficking of firearms, the greatest danger lies not in the profits generated but rather the human misery the guns are able to inflict and the instability they can foment. West Africa has witnessed a series of coups and has a number of active rebel movements that seek firearms. Most of the illicit weapons originate from licit stocks, so limiting the size of these stocks and keeping closer tabs on them might help reduce the problem.

Fraudulent medicines is a significant health problem for West Africans. While the profits generated by the trafficking seem to be relatively small and dispersed, having a steady supply of substandard medication entering the market makes the sick even sicker. Tighter regulation and increased regional cooperation in this area may be one way to go to tackle the issue.

Maritime piracy is usually associated with the waters off the coast of Somalia, but is also a problem in the Gulf of Guinea. Much of this activity is linked to the regional oil industry and the existence of a booming black market for oil. Most of the attacks are simple robberies that yield relatively low profits for the criminals, but the frequency of the attacks drives insurance premiums up, which in turn decreases the use of West African ports for shipping and deprives cash-strapped regional Governments of vital income.