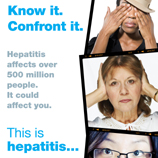 26 July 2013 - The Executive Director of UNODC, Yury Fedotov, speaking ahead of World Hepatitis Day on 28 July, stressed that viral hepatitis remains a serious health problem worldwide, and urged authorities to ensure that all victims, including injecting drug users and prisoners, get the care and treatment they need.

"Hepatitis represents a major global health risk. Hepatitis C can lead to liver diseases such as cirrhosis and cancer, and infection is widespread among injecting drug users, with UNODC's 2013 World Drug Report estimating global prevalence of hepatitis C among people who inject drugs at 51 per cent. Hepatitis infection in prison populations is also many, many times higher than in the general population. The majority of people detained will return to their communities, some within months.

"However, many of those infected with hepatitis are unaware, and therefore may go undiagnosed and untreated, posing a risk of transmission to their families, coworkers and neighbours. We must further strengthen prevention efforts if we are to stop the spread of this threat to public health.

"UNODC and its UN partners promote an integrated response to preventing hepatitis and providing treatment and care. This includes comprehensive packages of interventions for injecting drug users and prisoners to stop the spread of HIV and other infectious diseases such as hepatitis B and C.

Necessary measures include treating drug dependency and instituting condom programmes as well as needle and syringe programmes. Broader questions of policy and criminal justice, including conditions in prisons, the use of pre-trial detention as well as incarceration for people convicted of drug use, should also be addressed.

All people suffering from viral hepatitis deserve access to the same level of care and treatment available in the community. If interventions are to be effective, they must be grounded in respect for the human rights and right to health of all sufferers."

World Hepatitis Day is observed every year on 28 July and raises awareness around the world of hepatitis B and hepatitis C, as well as promotes prevention, diagnosis and treatment of the diseases.

Viral hepatitis, which includes a group of infectious diseases known as Hepatitis A, B, C, D, and E, affects hundreds of millions of people worldwide, causing acute and chronic disease and killing close to 1.4 million people every year.