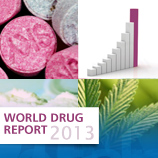 26 June 2013 -The 2013 World Drug Report released today in Vienna shows that, while the use of traditional drugs such as heroin and cocaine seems to be declining in some parts of the world, prescription drug abuse and new psychoactive substance abuse is growing. In a special high-level event of the Commission on Narcotic Drugs, UNODC Executive Director Yury Fedotov urged concerted action to prevent the manufacture, trafficking and abuse of these substances.

Marketed as 'legal highs' and 'designer drugs', NPS are proliferating at an unprecedented rate and posing unforeseen public health challenges. The report shows that the number of NPS reported to UNODC rose from 166 at the end of 2009 to 251 by mid-2012, an increase of more than 50 per cent. For the first time, the number of NPS exceeded the total number of substances under international control (234). Since new harmful substances have been emerging with unfailing regularity on the drug scene, the international drug control system is now challenged by the speed and creativity of the NPS phenomenon.

This is an alarming drug problem - but the drugs are legal. Sold openly, including via the internet, NPS, which have not been tested for safety, can be far more dangerous than traditional drugs. Street names, such as "spice", "meow-meow" and "bath salts" mislead young people into believing that they are indulging in low-risk fun. Given the almost infinite scope to alter the chemical structure of NPS, new formulations are outpacing efforts to impose international control. While law enforcement lags behind, criminals have been quick to tap into this lucrative market. The adverse effects and addictive potential of most of these uncontrolled substances are at best poorly understood.

The global picture for the use of traditional drugs such as heroin and cocaine shows some stability. In Europe, heroin use seems to be declining. Meanwhile, the cocaine market seems to be expanding in South America and in the emerging economies in Asia. Use of opiates (heroin and opium), on the other hand, remains stable (around 16 million people, or 0.4 per cent of the population aged 15-64), although a high prevalence of opiate use has been reported from South-West and Central Asia,  Eastern and South-Eastern Europe and North America.

Africa is emerging as a target for the trafficking as well as production of illicit substances, although data are scarce. Mr. Fedotov called for international support to monitor the situation and to prevent the continent from becoming increasingly vulnerable to the drugs trade and organized crime. There is also a need to help the large number of drug users who are the victims of the spill-over effect of drug trafficking through the continent.

In terms of production, Afghanistan retained its position as the lead producer and cultivator of opium globally (75 per cent of global illicit opium production in 2012). The global area under opium poppy cultivation amounted to 236,320 ha and was thus 14 per cent higher than in 2011. Nonetheless, given a poor yield, owing to a plant disease affecting the opium poppy, in Afghanistan, global opium production fell to 4,905 tons in 2012, 30 per cent less than a year earlier and 40 per cent less than in the peak year of 2007.

Estimates of the amounts of cocaine manufactured ranged from 776 to 1,051 tons in 2011, largely unchanged from a year earlier. The world's largest cocaine seizures - unadjusted for purity - continue to be reported from Colombia (200 tons) and the US (94 tons). Cocaine use continues falling in the US, the world's largest cocaine market.  In contrast, significant increases in seizures have been noted in Asia, Oceania and Central and South America, and the Caribbean in 2011.

The use of amphetamine-type stimulants (ATS), excluding ecstasy, remains widespread globally and appears to be increasing in most regions. In 2011, an estimated 0.7 per cent of the global population aged 15-64, or 33.8 million people, had used ATS in the preceding year.

Methamphetamine continues to dominate the ATS business, accounting for 71 per cent of global ATS seizures in 2011. Methamphetamine pills remain the predominant ATS in East and South-East Asia: 122.8 million pills were seized in 2011, although this was a 9 per cent decline compared with 2010 (134.4 million pills).  Seizures of crystal methamphetamine, however, increased to 8.8 tons, the highest level during the past five years, indicating that the substance is an imminent threat.  Mexico recorded its largest seizures of   methamphetamine, more than doubling within a year from 13 tons to 31 tons, thus representing the largest reported seizures globally.

Cannabis remains the most widely used illicit substance. While cannabis use has clearly declined among young people in Europe over the past decade, there was a minor increase in the prevalence of cannabis users (180 million or 3.9 per cent of the population age 15-64) as compared with previous estimates in 2009.