On World Drug Day, the message is "Make health your 'new high'" 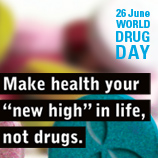 25 June 2013 - Tomorrow, 26 June, the world will commemorate the International Day against Drug Abuse and Illicit Trafficking, an occasion to drive home the message that drug use can take a heavy toll on health and well-being. UNODC has long been at the forefront of awareness campaigns about the dangers posed by traditional drugs such as cannabis, heroin, cocaine and amphetamine-type substances.

Today, however, there is an alarming new drug problem. Demand has soared for substances not under international control, which are posing significant public health challenges. Therefore, the 2013 UNODC global awareness campaign "Make health your 'new high' in life, not drugs " aims to inform the public, particularly young people, about the harmful effects of new psychoactive substances (NPS). Sold openly, including online, these untested concoctions can be far more dangerous than traditional drugs.

Marketed as "legal highs" and "designer drugs", NPS are proliferating at an unprecedented rate. Nicknames, such as "spice", "meow-meow and "bath salts" mislead young people into believing that they are indulging in low-risk fun with no risk of getting hooked. "Herbal highs" and "plant food" are among the names given to plant-based stimulants, which include salvia divinorum and khat. The total number of such substances, already estimated to be in the hundreds, is growing steadily. Mixtures of NPS bought unknowingly by users have caused unpredictable and sometimes disastrous effects.

Due to sheer number of new drugs arriving on the scene almost weekly, the adverse effects of these uncontrolled substances and their addictive potential may be poorly understood. The difference between a "safe" and toxic dose can be minute and NPS have been associated with delirium and violent behaviour.

Everyone has a part to play in protecting the youth of the world from dangerous substances. UNODC leads the World Drug Campaign to raise awareness about the major challenge that illicit drugs pose to society as a whole, and especially to young people.  The campaign aims to mobilize support and inspire people to act against drug abuse.

UNODC has created a new campaign page featuring a leaflet and poster on NPS and more. Find out how to get involved here: www.unodc.org/drugs and join the Facebook Page: www.facebook.com/worlddrugcampaign

Poster: Categories of New Psychoative Substances sold in the market