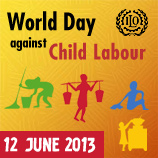 12 June 2013 - Children all over the world are being abused by criminals who regard human beings as commodities to be exploited or traded for profit. An estimated 10.5 million children worldwide are working as domestic workers in people's homes, in hazardous and sometimes slavery-like conditions, says the International Labour Organisation. In August 2010, the General Assembly established the United Nations Voluntary Trust Fund for Victims of Human Trafficking and in 2011, the Fund awarded grants to grassroots non-governmental organizations that directly assist victims and survivors around the world.

On World Day against Child Labour, we share the stories of two children who got a second chance in life thanks to the work of the beneficiaries. Their names have been changed to protect their identities, but their stories are true, and their plight highlights the diverse forms that human trafficking can take.

Lina comes from a poor family in Cambodia. At the age of nine, her parents entrusted her to an acquaintance who said she could find Lina work in Thailand. The woman promised to send Lina's parents part of her wages to help support their family.

In Bangkok, Lina stood for long hours outside nightclubs in the red-light district selling flowers and candy to tourists. Her trafficker took her earnings, and beat her when sales were low. After two years, her trafficker convinced Lina's parents to also allow her eight-year-old sister, Sopheak, to work in Bangkok. Unwilling to let her sister suffer the same abuse, Lina determined they must escape. She asked a nightclub worker for help - luckily he agreed.

After spending several months in a Thai children's centre, the girls were returned to Cambodia. The Damnok Toek Poipet Reception Centre for trafficked and abused children gave Lina and Sopheak a safe place to live, three meals a day, individual counselling and schooling. It also located their family. Today, both girls are happy and safe, and they have goals that are truly within their grasp: Lina, now 12, intends to be a teacher, and Sopheak, age nine, wants to be a nurse.

The Damnok toek Reception Centre in Poipet, Cambodia, provides vital services, including food and shelter, counselling, medical care and education, to child victims of trafficking and children at high risk of being trafficked. The Centre aims to prevent children from being re-trafficked, and whenever possible, it helps reintegrate trafficked children into their families.

Lured by promises of schooling and a job as a houseboy, 13-year-old Jacob left his village in Kenya and accompanied some men to Nairobi. Once there, they told him the plans had changed. The men took Jacob to Mombasa and made him hunt for scrap metal to sell. If he didn't find enough, he was forced to beg in the streets and would go to sleep hungry. He had no way to contact his family or seek help.

After several months, Jacob ran away and fled to the nearby town of Malindi, but when he couldn't feed himself from begging, he started committing petty crimes. Soon he was arrested. The CRADLE, an organization that provides legal aid services to children, stepped in to help. It got a court to declare Jacob in need of care and protection, and criminal charges were dropped. The CRADLE provided Jacob with counselling and reunited him with his family.

Jacob, now 14, is happy to be home. He is studying hard so he can get into a national secondary school. About his future he says, "I would like to be a teacher or a policeman who helps people when they are in trouble."