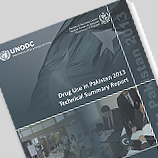 12 March 2013 - The technical summary of the Drug Use in Pakistan 2013 Report launched during the Commission on Narcotic Drugs reveals how a substantial proportion of Pakistan's population aged 15 to 64 suffer from the devastating consequences of substance abuse. The Report estimates that 5.8 per cent - or 6.4 million adults in Pakistan - used drugs in the last 12 months. Although 4.1 million individuals are thought to be drug dependent, treatment and specialist interventions are in short supply, available to less than 30,000 drug users a year. Moreover, not all structured treatment is free of charge. In a country where almost a quarter of the population is estimated to be living on less than US$ 1.25 a day, the barriers preventing access to structured treatment are exceptionally high.

Cannabis was found to be the most commonly used drug in Pakistan, with by 3.6 per cent of the adult population, or four million people, listed as users. Opiates, namely opium and heroin, are used by almost one per cent of overall drugs users, and the highest levels of use are seen in the provinces which border principal poppy-cultivating areas in neighbouring Afghanistan.

Alarmingly, the Report also shows high prevalence in non-medical use of prescription drugs nationwide, particularly amongst women. Almost all women who reveal they used drugs resort to misusing opioid-based painkillers, and to a lesser extent tranquillizers and sedatives, which are readily available in pharmacies. Another key finding is the emergence of methamphetamine use in some areas of the country.

Vulnerability to HIV and other blood-borne diseases through injecting drug use is also considerable, with 420,000 drug users estimated to be injecting drugs in Pakistan, a higher estimate than ever reported previously.

The Drug Use in Pakistan 2013 - Technical Summary Report is the result of a collaborative research effort between the Ministry of Narcotics Control, Pakistan Bureau of Statistics, and UNODC. It aims to provide baseline information on the prevalence and patterns of drug use among the population aged 15 to 64 in order to inform Government, civil society and private-sector organizations in designing and implementing effective prevention, treatment and care services across the country.