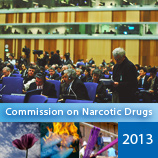 11 March 2013 - The Fifty-sixth session of the Commission on Narcotic Drugs (CND) kicks off today with over 1,000 representatives from Member States and civil society, as well as high level speakers and government ministers from across the globe. Policy-makers will meet in Vienna from 11 to 15 March to discuss issues ranging from international cooperation in combating drugs to public health and safety concerns, including the threat of new psychoactive substances. UNODC's Executive Director Yury Fedotov said this year's CND session "has a primary institutional role to play in defining the international drug control system of the 21st Century."

The CND is the central policy-making body within the United Nations system dealing with illicit drugs and is the governing body for the work of UNODC in this area. The Commission provides Member States with the opportunity to exchange expertise, experiences and information on drug-related matters and to develop a coordinated response. A number of side events will be held during the session, covering a range of topics related to drug treatment and prevention as well as drug control and law enforcement responses. This includes an event to launch new international standards on drug use prevention and events to discuss the tracing of precursor chemicals and how to counter cash smuggling.

Speaking at the opening of the Fifty-sixth Session, Yury Fedotov said that illicit drugs and crime were roadblocks to the rule of law and to democracy. As such, they represented a clear threat to the stability and security of entire regions and to economic and social development.

In the area of international drug control, Mr. Fedotov said, "we must ask ourselves tough questions about whether we have managed to reduce the global drug threat. There are no easy answers." He also stressed the important role played by the drug conventions in containing and stabilizing levels of drug consumption, noting that, while there has been declines in the production of consumption of certain drugs, these trends have been offset by the rise of synthetic drugs and new psychoactive substances, and that illicit drugs continued to kill more than five hundred men, women and children every day.

This year's CND session precedes a high level review of the implementation of the Political Declaration and Plan of Action in 2014, which will be followed by a Special Session of the UN General Assembly on the drug problem in 2016.  These reviews will help refine the international community's approach to illicit drugs in years to come.

Fifty-sixth Session of the Commission on Narcotic Drugs