Getting to zero on HIV and AIDS 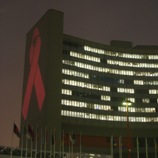 29 November 2013 - On 1 December, UNODC commemorates World AIDS Day by remembering those who have fallen to AIDS, taking stock of years of hard work to curb the epidemic and having an honest look at what still needs to be done to achieve the three zeros - zero new HIV infections, zero discrimination and zero AIDS-related deaths.

In his statement on World AIDS Day, UNODC Executive Director Yury Fedotov said "HIV-related stigma and discrimination continue to impact the lives of people living with HIV and prevent so many others from accessing the services they need. Women, girls, people who use drugs, people in prisons, sex workers and so many other vulnerable groups struggle without access to life-saving services because of who they are or what they do."

"In 2014 UNODC will chair the UNAIDS Committee of Cosponsoring Organizations. I will use this opportunity to encourage all stakeholders in the HIV response to scale-up evidence-informed HIV interventions for all key populations,"  he added.

In 2013, UNODC estimated that there were 14 million people injecting drugs worldwide and that some 1.6 million of them were living with HIV. Injecting drug use continues to drive the expansion of the HIV epidemic in many countries around the world, and the gaps in many national HIV plans and strategies continue to affect disproportionately people who use drugs and those in prisons.

As part of this prioritisation exercise, national work plans have been developed and requests for capacity building opportunities for both law enforcement officials and civil society organisations were high on the agenda. UNODC responded by organising a series of workshops in nine countries (Tajikistan, Kyrgyzstan, Kazakhstan, Vietnam, Thailand, Myanmar, India, Tanzania, Zanzibar, and South Africa) to foster a dialogue between groups who play crucial roles in HIV response for people who inject drugs in order to enhance partnerships. As one of the participants said "this is the first and most important step in the right direction". UNODC is also finalising a Global HIV Training Manual for Law Enforcement Agencies which will be available in the new year.