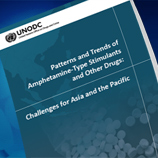 The report, Patterns and Trends of Amphetamine-Type Stimulants (ATS) and Other Drugs - Challenges for Asia and the Pacific 2013, says that methamphetamine is now the first or second most used illicit drug in 13 of the 15 Asia Pacific countries surveyed. The use of methamphetamine increased in Cambodia, China, Japan, Lao People's Democratic Republic, Myanmar, the Republic of Korea, Thailand and Viet Nam.

Transnational organized criminal groups active in the region's illicit drug trade continue to diversify their approach, the report says. Drug trafficking is dominated by regional syndicates, while groups from Africa and Iran have continued to expand their trafficking of methamphetamine and other drugs into East and Southeast Asia. Indian and South Asian networks are playing an increasing role in smuggling precursor chemicals and pharmaceutical drugs containing precursor chemicals necessary to manufacture methamphetamine in East and Southeast Asia, including Myanmar.

"The worsening illicit drug situation has a domino effect on governance, greatly taxing criminal justice and health systems and threatening human security in countries throughout Asia and the Pacific," said Jeremy Douglas, UNODC Regional Representative for Southeast Asia and the Pacific. "While regional integration positively facilitates the free flow of goods, services, investment, capital and labour, it is also being exploited by transnational organized crime to expand its activities in our region," he noted.

Myanmar remains the primary source of methamphetamine pills in East and Southeast Asia, according to the UNODC report, which notes the first-ever dismantling of a crystal methamphetamine laboratory there and the seizure of four pill pressing operations in 2012. Besides Myanmar, large quantities of ATS continue to be manufactured in China, Malaysia, Indonesia, the Philippines, Cambodia, as well as Australia and New Zealand.

China (102 million pills seized), Thailand (95 million), Myanmar (18 million) and Lao PDR (10 million) accounted for 99 per cent of all methamphetamine pills seized in the region in 2012. Malaysia and Viet Nam also reported "significant increases" in seizures in 2012.

UNODC also notes a resurgence of the 'ecstasy' market in East and Southeast Asia, with ecstasy pill seizures more than tripling in 2012 to over 5.4 million pills from 1.6 million pills seized in 2011.

The report warns that the neighbouring regions of South Asia and the Pacific Island States and Territories are being "targeted" for illicit ATS manufacture and trafficking.

"International drug trafficking groups seek to use South Asia as a major base, given the high availability there of the precursor chemicals necessary to manufacture illicit synthetic drugs," said Mr. Douglas. "They also continue to use the Pacific region as a transit point for trafficking methamphetamines and precursor chemicals to and from Asia."

Full Report: Patterns and Trends of Amphetamine-Type Stimulants (ATS) and Other Drugs - Challenges for Asia and the Pacific 2013