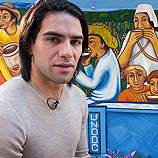 20 November 2013 - Yury Fedotov, UNODC Executive Director, has designated world-renowned Colombian footballer Radamel Falcao García Zárate as UNODC Goodwill Ambassador. Falcao, as he is known to legions of fans, is one of the best strikers in the world and currently plays for Monaco F.C. after enjoying many successful seasons with Atlético Madrid.

"Falcao is one of the most exciting players of our time, bringing great attacking flair and style to the game. He has performed at the highest international level and will carry the hopes of his nation to the World Cup next year," Mr. Fedotov said. "But he has also used his skill to inspire young people and show them the way to a healthy lifestyle. He is a role model of fair play, dedication and humility not just in his native Colombia, but also worldwide."

"I am proud to be a UNODC Goodwill Ambassador," said Falcao. "My goal is to help the youth of this world show drugs a red card."

Falcao made his professional debut in 1999 aged 13. He scored over 100 goals during three European football seasons, becoming the first player in history to win two consecutive European titles with two different teams while also becoming the top goal scorer for both teams. He also played a key role in F.C. Porto's Europa League win. Falcao won his first UEFA Super Cup in 2012, becoming the first player ever to score a hat-trick in the tournament. His most remarkable feat is his goal-by-minute ratio, exceeding that of top stars Lionel Messi and Cristiano Ronaldo. He has been shortlisted for the FIFA Puskás Award for the best goal of 2012 and the FIFA Ballon d'Or in 2012 and 2013.

Falcao will speak out on drug prevention, visit UNODC projects, and witness first-hand both the challenges and achievements in the fight against drugs and crime.

"Football is the most popular sport in the world, with billions of fans around the globe. As UNODC Goodwill Ambassador, you can help us reach the young and marginalized," Mr. Fedotov told Falcao. "I look forward to working with you and seeing young people fulfil their potential - as you have".