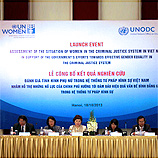 07 November 2013 - In recent years Viet Nam's legal system has undergone significant changes, including with regard to gender-based rights. On the back of the country's judicial reform policy in the mid-2000's, the 'Law on Gender Equality' was passed, illustrating the Government's commitment to building a just and democratic legal system. Yet despite this legislative progress, women in Viet Nam still encounter many difficulties within the criminal justice system, whether as survivors or perpetrators of crime, or employees in the criminal justice sector.

Zhuldyz Akisheva, UNODC's Country Manager in Viet Nam, notes the value of the assessment in helping understand the realities that women face when dealing with the justice system: "This report is crucial in identifying obstacles and challenges that affect women's access to justice, both as survivors and offenders, and by revealing more about the situation of women as professionals in the justice system. This is echoed by Shoko Ishikawa, UN Women Country Representative: "The assessment lets us know to which extent the gaps between de jure and de facto equality exists. It illustrates de facto equality, which suggests all of us need to invest stronger efforts to ensure that men's and women's similarities and differences are recognized and equally valued and that their opportunities and their benefits become and remain equal."

In Viet Nam, patriarchal norms have created a society in which gender-based violence is often considered to be 'normal' and women are encouraged to deal with violence outside of the criminal justice system. As a result, rates of reporting violence against women are low, and victims are often referred to reconciliation facilitators within their local community to arrive at a solution within the family before involving the criminal justice system.

For cases that do enter the criminal justice system, the investigation and evidence-gathering process presents many difficulties. Though legislation has been passed to prohibit violence against women, the police and prosecutor's office have had limited guidance or training on the implementation of these laws. Once a case comes to trial, women are frequently unable to access legal aid services and the court does not have procedures in place to appropriately deal with the specific needs of victims of violence.

As is the case with women victims of crime, gender stereotypes influence the treatment of women who come into conflict with the law as well. Available data indicates women commit fewer crimes than men in Viet Nam and make up only 10 per cent of the prison population. While there are some specific provisions for female offenders and prisoners, the criminal justice system is male-focused and male-dominated. Women have different biological (i.e. pre- and post-natal) and societal needs (such as typically being the primary caregivers for children) that the criminal justice system does not always address. This assessment additionally explores recent legislation which closed 'compulsory education centres' for sex workers as a significant step towards the Government's efforts to reduce stigmatisation of women involved in sex work.

Women working in the criminal justice system in Viet Nam also face specific challenges, particularly in terms of being under-represented. While females are making inroads at the lower levels of some of the criminal justice agencies, such as the courts and legal aid centres, the higher positions in all agencies remain strongly male dominated. There are a number of challenges faced by women working in the criminal justice system: male defined employment standards, the problem of sexual harassment in the workplace, a larger share of child caring and household responsibilities, and different requirements for the age of retirement which impacts on opportunities for promotion, are just a few of these.

The assessment proposes a range of major suggestions to help with the situation, including conducting additional research and analysis in line with the improved implementation, and monitoring and evaluation of existing laws and policies. Three specific recommendations for the promotion of women's rights are also included in the assessment, namely: