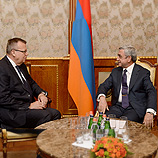 23 October 2013 - Yury Fedotov, Executive Director of UNODC, completed an official two-day mission to Armenia with a final round of meetings that included discussions with  the President of the Republic of Armenia Serzh Sargsyan and the Prime Minister Tigran Sargsyan.

Speaking after the conclusion of these meetings, Mr. Fedotov said, "I thank the government for the invitation to visit Armenia. Our discussions will serve as a firm foundation for our future work together."

In his meetings with the Prime Minister, President, as well as the Minister of Foreign Affairs, Edward Nalbandian, Mr. Fedotov expressed his support for the vision shown by the government in the areas of crime prevention, criminal justice, corruption and drug control.

He also welcomed the on-going judicial reforms in Armenia aimed at improving the effectiveness of the country's penal system. "UNODC is ready and willing to assist the Armenian government with this work and to help in prioritising where future support should be directed," said Mr. Fedotov.

Mr. Fedotov's mission to Armenia was undertaken to strengthen cooperation between UNODC and Armenia and to gain a deeper appreciation of where UNODC can provide assistance based on its own broad mandate.