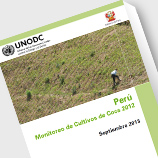 25 September 2013 - Coca bush cultivation is down some 3.4 per cent in Peru, according to the 2012 national coca monitoring survey (PDF in Spanish) presented yesterday by the United Nations Office on Drugs and Crime (UNODC) and the Peruvian Government. The area under cultivation as of 31 December 2012 was estimated at 60,400 ha, down from the previous year's total of 62,500 ha.

Flavio Mirella, UNODC Representative in Peru, whose office has been jointly producing the annual survey with the Peruvian Government since 1999, attributed the positive trend to the National Anti-Drug Strategy launched in 2012 coupled with programmes to provide farmers with alternative livelihoods. Such programmes have been especially effective in the Alto Huallaga region, which is among the country's biggest coca crop producers.

The Government eradicated over 14,230 ha of coca crop in Alto Huallaga and Aguaytia. These areas, together with the Apurímac-Ene and Mantaro River Valley (VRAEM), are strongly associated with drug trafficking and terrorism. Nevertheless, the arrest of "Artemio", a key Shining Path leader, has facilitated the involvement of farming communities in alternative development programmes.

Satellite images and field surveys showed that some 13 regions were involved in coca-crop growing nationwide, with Cusco, Ayacucho and Huánuco recording the largest areas under cultivation, followed by the Palcazu-Pichis-Pachitea area, which saw a 25 per cent increase.

The total coca leaf output reached around 129,000 metric tons, down nearly 2 per cent compared with 131,000 tons of sun-dried coca leaf produced in 2011. An estimated 9,000 tons were used for the traditional practice of chewing coca leaves, leaving around 120 tons for the illegal markets.

Production was mostly concentrated in the Lower Amazon area bordering Colombia and Brazil, which witnessed a 73 per cent increase compared with 2011. The location of this area makes it easy to transport chemical precursors needed to produce drugs and also facilitates cross-border drug trafficking. As in previous years, VRAEM led coca leaf production with over 56 per cent of the crop share. The national average yield of sun-dried coca leaves was 2.1 tons per hectare with VRAEM taking 3.6 tons per hectare but Alto Chicama registering some 0.9 tons per hectare.

Farm-gate prices of coca leaf in 2012 retained average values of $3.3 per kg. The average price of base cocaine was down almost 10 per cent to some $737 per kg while cocaine hydrochloride cost on average some 3 per cent less at $990 per kg.

Seizures of base cocaine were up some 40 per cent to nearly 20,000 kg with interceptions of cocaine hydrochloride also increasing about 20 per cent to around 12,700 kg.