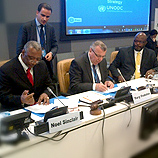 7 April 2014 - The Executive Director of the UN Office on Drugs and Crime (UNODC), Yury Fedotov, today launched the UNODC Regional Programme in support of the Caribbean Community's (CARICOM) Crime and Security Strategy at an event held at the UN Headquarters in New York.

In his speech, Mr. Fedotov said: "The nexus between transnational organized criminal activities such as cocaine trafficking and illegal guns; gangs; cyber-crime; financial crime and corruption has been identified in the CARICOM Crime and Security Strategy as an immediate and significant threat."

Mr. Fedotov also echoed the concerns of regional Member States, noting that the Caribbean's geographical position provided the underpinning for some of the region's challenges due to its location "between major drug-producing countries in the south and major consumer markets in the north." For this reason, he said, the Caribbean "remained extremely vulnerable to the threats posed by illicit trafficking and organized crime."

According to UNODC's World Drug Report 2013, cocaine retains its position as the illicit drug of chief concern in the Caribbean. The prevalence rate for cocaine in the Caribbean is 0.7 per cent compared to a rate of 0.6 per cent in Central America.

Youth violence also remains a challenge. Young people under the age of 30 represent 60 per cent of the region's population and are both the main perpetrators and victims of crime. Illegal firearms are also responsible for over 70 per cent of homicides in the region.

The Regional Programme consists of five sub-programmes which are aligned with the strategic goals presented in the CARICOM Crime and Security Strategy. The sub-programmes include: (i) Countering transnational organized crime, Illicit Trafficking and Terrorism; (ii) Countering Corruption and Money Laundering; (iii) Preventing Crime and Reforming Criminal Justice; (iv) Drug Use, Prevention and Treatment and HIV/AIDS and (v) Research, Trend Analysis and Forensics. The initial budget of the Regional Programme is US$11.7 million for the years 2014-2016.

Also speaking at the event attended by representatives of Member States were the Adriel Brathwaite, Attorney General and Minister of Home Affairs of Barbados, Noel Sinclair, Deputy Chef de Cabinet, Office of the President of the 68th General Assembly, Francis Forbes, Executive Director of CARICOM Implementation Agency for Crime and Security (IMPACS), Henry Leonard Mac-Donald, CARICOM Chair and Permanent Representative of Suriname to the UN, and Thomas Mayr-Harting, Head of the Delegation of the European Union to the UN.

UNODC Regional Office for Central America and the Caribbean