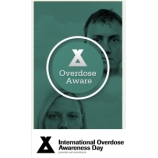 29 August 2014 - According to the UNODC's World Drug Report 2014, there are approximately 180,000 drug related deaths each year, most of them due to preventable overdoses. Opioid overdose makes up the largest category, affecting mainly young people: 13 per cent of overdose deaths reported in Europe occur among those aged under 25 years. Additionally, in countries with low HIV prevalence, drug overdose is the main cause of death among problem drug users, accounting for up to 50 to 60 per cent of deaths among people who inject drugs.

International Overdose Awareness Day (31 August) was initiated in 2001 by the Penington Institute, an Australian civil society organisation. This day is an opportunity to raise awareness and call for action to save lives and reduce the stigma associated with drug-related deaths. On this 31 August, UNODC highlights that death by overdose is preventable.

UNODC works in different countries to assist Member States in overdose death prevention. In Kazakhstan and Kyrgyzstan, for instance, UNODC supports projects which distribute naloxone through networks of outreach workers - reaching out to people who inject drugs, in the case of an overdose, while emergency responders arrive. In addition, counselling on the risks associated with injecting drug use is also provided. Since most overdoses are believed to happen in the presence of someone else, the timely administration of naloxone is crucial to saving lives.

Programmes like these require the support and active participation of governments, health services, police and the communities of people who use drugs. In 2013, governments meeting at the Commission on Narcotic Drugs called for the promotion of measures to prevent drug overdose, in particular overdose by opioids. UNODC, for its part, is supporting pilot projects to introduce intra nasal naloxone to communities, families and peers through drug dependence treatment centres, reaching out and increasing access to this life saving intervention.

Discussion paper by UNODC and WHO on opioid overdose