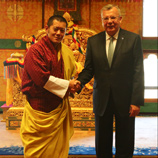 10 December 2014 - In Bhutan for his first official visit to the country, UNODC Executive Director Yury Fedotov met with the King of Bhutan, Jigme Khesar Namgyel Wangchuck, and several high ranking members of the government of Bhutan, including Acting Prime Minister Damcho Dorji on 8 December.

Mr. Fedotov said afterwards: "My meeting with the King reinforces the excellent partnerships UNODC has forged with local bodies in the country. These relationships will do much to enable our South Asia Regional Programme to help authorities in Bhutan counter drug trafficking, support drug users and those living with HIV, and eliminate human trafficking."

In a morning meeting with Acting Prime Minister Dorji, who is also the Minister of Home and Cultural Affairs, the UNODC Chief congratulated him on the work of the country's Narcotics Control Agency and Bhutan's commitment to terrorism prevention. He also invited Bhutan to ratify and implement the UN Convention against Corruption, and the UN Convention Against Transnational Organized Crime, and its three protocols on firearms, smuggling of migrants and human trafficking.

"If we are to successfully tackle drugs and crime, every country in South Asia needs to connect their anti-corruption activities, border control, information sharing and joint operations to the activities of other countries. The two conventions on corruption and transnational organized crime provide the architectural plans for achieving this," said Mr. Fedotov.

During his Bhutan mission, Mr. Fedotov visited the UNODC-supported De-addiction Centre for Men and Women where he had an opportunity to see, at first-hand, the assistance given to drug users. The government of Bhutan recently raised concerns over drug use among young people. UNODC is also currently working in the country to train health care professionals to respond to potentially fatal drug overdoses.