Colombia's Carnival of Barranquilla has a Blue Heart 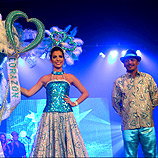 26 February 2014 - One of the most traditional festivals in Colombia - the Carnival of Barranquilla - has joined the Blue Heart Campaign to raise awareness about human trafficking. A Blue Heart troupe will parade during this year's festivities, taking place between 1 and 4 March 2014, to lend support to the global campaign.

The initiative is part of a wider campaign in Colombia to educate citizens in the country's Atlántico department about the risks of being trafficked and reduce the vulnerability of populations at risk. The campaign uses the slogan No Somos Mercancía (Spanish for "We are Not Merchandise") and foresees an array of activities that tap into popular events, such as the Carnival, and deploy mass media strategies to get the message across.

At the campaign's launch last week, Blue Heart costumes were presented to this year's Carnival Queen and her counterpart King Momo - the main characters of the Barranquilla Carnival, which has been declared Intangible Heritage of Humanity by UNESCO. Reading out her royal mandate, the Carnival Queen voiced her commitment to the prevention of modern-day slavery.

She also received a Blue Heart crosier (a hooked staff denoting her royal office) from UNODC's Representative in Colombia Bo Mathiasen, as a symbolic gesture to mark the official launch of campaign activities, and recorded a video message in support of the campaign.

UNODC teamed up with the Autonomous University of the Caribbean and the local government to design and implement the campaign. "Since 2011, with the support of the national government and the private sector, our office has implemented a number of activities to promote the Blue Heart and raise awareness against human trafficking," said Mr. Mathiasen. "With the No Somos Mercancía campaign, both partners are expressing additional commitment to an issue of global concern and clear local impact" he added.

The Blue Heart Campaign seeks to encourage involvement and inspire action to help stop the crime of human trafficking. It allows people to show solidarity with the victims of such trafficking by wearing the Blue Heart, an international symbol against this crime.

Message of the Queen of Carnival
on Human Trafficking