Crime in a box: the international trafficking of clandestine goods in containers 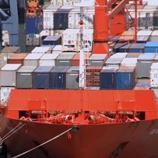 17 February 2014 - While some 500 million containers move across the globe each year, accounting for nearly 90 per cent of global trade, less than two per cent of these are ever physically inspected. Although the majority transport legal cargo, freight containers are constantly targeted for the shipment of drugs, counterfeit goods, weapons, and other illicit products, which are smuggled alongside legal commodities.

Since its establishment, the CCP has created more than 30 operational port control units worldwide in 17 countries, leading to significantly increased detections and confiscation of drugs and other illicit goods. From Panama to Pakistan, Togo to Turkmenistan, Guatemala to Ghana, the Programme has helped seize more than 80 tons of cocaine, 2.2 tons of heroine, over 55 tons of cannabis, as well as significant amounts of precursor chemicals (1,240 kg), counterfeit goods, hazardous materials, wildlife, electronic-waste and other illicit goods.

A new documentary commissioned by UNODC and produced by the United Nations Television Service (UNTV) tells the story about the international trafficking of clandestine goods in containers, and illustrates the joint UNODC/WCO efforts to address it: