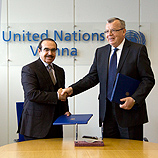 "I very much welcome this partnership with the Ministry of Interior of Bahrain. Stopping illicit drugs reaching their intended markets requires an integrated approach based on activities at the local, regional and international levels," said Mr. Fedotov. "The Gulf region is an integral part of our overall global strategy against illicit drugs, and UNODC remains firmly committed to assisting the Kingdom of Bahrain and other Gulf Cooperation Countries in the exchange of information and cross-border operations."

Speaking at the signing, Lieutenant General Sheikh Rashid bin Abdullah Al Khalifa, said, "The Ministry of Interior of the Kingdom of Bahrain and UNODC share common objectives when it comes to combating and preventing crime. This MoU further strengthens our existing cooperation. It is part of the comprehensive reform package introduced by the Ministry some years ago. It will enhance and strengthen the Ministry's capabilities and provide the benefit of the best international expertise. The Ministry looks forward to the continuation of its close relationship with UNODC."

The MoU between UNODC and Bahrain supports the Interior Ministry's law enforcement reform in drug control, crime prevention and emerging forms of crime. The cooperative agreement will also provide the foundation for a training programme in partnership with the Royal Academy of Police.

Gulf countries are vulnerable to trafficking in cocaine, heroin, and other illicit drugs due to their geographical position. This emphasizes the need to intercept the illicit drugs and precursor chemicals as they move between ports in West Asia and the Gulf region.

Between 19 and 23 January of this year, Mr. Fedotov visited Oman, the United Arab Emirates (UAE) and Bahrain to discuss drugs and crime, as well as to strengthen UNODC's initiatives in the Gulf region.