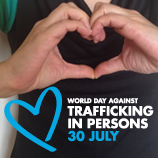 25 July 2014 - Ahead of the first ever World Day against Trafficking in Persons (30 July), we hear the harrowing experiences of human trafficking survivors, as well as their stories of hope thanks to the work of grassroots organizations helping the victims of this despicable trade. Managed by UNODC, the United Nations Voluntary Trust Fund for Victims of Human Trafficking supports on-the-ground humanitarian, legal and financial aid to victims in a bid to help them start a new life free from slavery.

Marta grew up in one of the most economically and socially deprived communities of Putarenas, a city on Costa Rica's Pacific coast. She and her younger sister never knew their father, and their alcoholic mother was violent toward the girls.

At age 13, Marta took a job as a household servant. If she earned some money, she and her sister could leave home and live somewhere safe.

Although Marta worked long hours, she was never paid for her domestic work. So when a friend introduced her to a woman who offered her a well-paid job helping foreign visitors in the capital, San José, Marta agreed. She thought she would be carrying luggage for tourists, but instead she was forced to have sex with foreign men.

Eventually someone reported Marta's situation to the police, who took her to a government-run shelter, where she received medical care, psychological counselling and legal aid. With assistance from Defence for Children International (DNI), which works with the shelter and was a Trust Fund grant recipient in 2011, Marta received counselling and went back in school and in vocational training. These empowering activities helped her to reintegrate into her community. Today Marta feels safe and can see the possibility of a better future for herself and her sister.

Lured by promises of schooling and a job as a houseboy, 13-year-old Jacob left his village in Kenya and accompanied some men to Nairobi. Once there, they told him the plans had changed. The men took Jacob to Mombasa and made him hunt for scrap metal to sell.  If he didn't find enough, he was forced to beg in the streets and would go to sleep hungry. He had no way to contact his family or seek help.

After several months, Jacob ran away and fled to the nearby town of Malindi, but when he couldn't feed himself from begging, he started committing petty crimes. Soon he was arrested. The CRADLE, an organization that provides legal aid services to children and was supported by the Trust Fund in 2011, stepped in to help. It got a court to declare Jacob in need of care and protection, and criminal charges were dropped. The CRADLE provided Jacob with counselling and reunited him with his family.

Jacob, now 14, is happy to be home. He is studying hard so he can get into a national secondary school. About his future he said "I would like to be a teacher or a policeman who helps people when they are in trouble."

Each year millions of children, women and men from all regions of the world are trafficked, their hope stolen. To mark the first ever United Nations World Day against Trafficking in Persons on 30 July, UNODC is encouraging people across the globe to symbolically help give back this precious item.

Join the #igivehope campaign and show your solidarity with victims of human trafficking. Download the ' how to'  for more details on how to get involved and sign up for the 30 July Thunderclap.

You can also make a direct difference to the lives of those affected by human trafficking. Donate today to the United Nations Trust Fund and visit www.unodc.org/humantraffickingfund to find out more about where your money will go to.