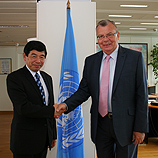 30 July 2014 - The Executive Director of the United Nations Office on Drugs and Crime (UNODC), Mr. Yury Fedotov, and the Secretary General of the World Customs Organization, Mr. Kunio Mikuriya, met in Vienna on 29 July 2014 to discuss the significant achievements of the UNODC/WCO co-managed Global Container Control Programme, which is in operation  in 20 countries.

In 2013, the Container Control Programme scored a series of notable successes against the criminal networks seizing over 23 tons of cocaine, around 6 tons of cannabis, 1.2 tons of heroin, 60 tons of tramadol and 725 kilograms of ivory.

Speaking after the meeting, Mr. Fedotov said: "By fusing the knowledge and experience of the WCO and UNODC, the Global Container Control Programme has produced success after success against the criminal networks who traffic in drugs, wildlife and other illicit goods. I look forward to working with the WCO in the future to continue to grow this highly successful global network and to potentially expand its reach into airfreight."

In his own remarks, Mr. Mikuriya, said: "With its emphasis on a global network of ports dedicated to the detection of trafficking in illicit goods, the Global Container Programme is helping to deliver on one of World Customs Organization most important goals: the protection of society. We will continue to work with UNODC to deliver tangible successes against the criminals."

The Global Container Control Programme was created in 2004 to thwart these criminal activities, and to bring together Customs and other law enforcement bodies into a single operational unit. These teams are trained to identify and select high-risk containers using risk analysis and other forms of modern risk management profiling techniques.

Today, the programme is deployed across all five continents and employs 48 people with an annual budget of around 10 million US dollars.