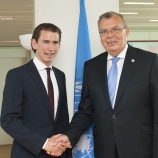 17 July 2014 - UNODC Executive Director Yury Fedotov expressed his deep appreciation to Austrian Foreign Minister Sebastian Kurz for the support given by Austria to UNODC's work in the areas of illicit drugs, organized crime, anti-corruption and terrorism.

Mr. Fedotov mentioned that Austrian backing was especially welcome in the field of human trafficking, where Benita Ferrero-Waldner's appointment as chair of the UN Trust Fund for the victims of this crime will help build support for the fund. Since its creation, the Trust Fund has supported 11 grassroots organizations to assist the many victims of this modern form of slavery. Countries, international organisations and civil society, on 30th July, will come together for the inaugural World Day against Trafficking in Persons. A UNODC event, on the same day, will be held in Vienna as part of its human trafficking campaign.

The meeting with the Foreign Minister also took place ahead of Austrian and UN celebrations to mark the 35th anniversary of the Vienna International Centre (VIC), an enduring symbol of the country's commitment to the UN and its multilateral efforts. As part of the joint celebrations, on Friday, 15th August, an Austrian holiday, the VIC will offer free guided tours and an opportunity for the public to learn more about the Vienna-based UN organizations.