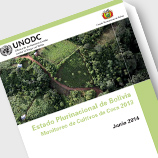 23 June 2014 - Cultivation of coca bushes decreased by around 9 per cent in the Plurinational State of Bolivia, according to the 2013 national coca monitoring survey released today by UNODC and the Bolivian Government. In 2013, the area under cultivation was around 23,000 hectares, while the previous year's figure was some 25,300.

Antonino De Leo, UNODC Representative in Bolivia, whose office has been jointly producing the annual survey with the Bolivian Government since 2003, underlined that "this decline confirms a downward trend over the last three years, during which period coca cultivation dropped by 26 per cent". He added that "in 2013, Bolivia recorded the lowest area under coca cultivation since 2002".

Satellite images and surveys on the ground showed reductions in the two main areas of cultivation. Yungas de La Paz and the Cochabamba Tropics - which together make up 99 per cent of the coca cultivation area - had reductions of 7 and 12 per cent, going from 16,900 to 15,700, and from 8,100 to 7,100 hectares, respectively. The rest of the surveyed area, in the Norte de la Paz provinces, saw an even sharper decrease of 28 per cent, from 320 to 230 hectares.

Government-led eradication contributed to the 9 per cent reduction in the total area of cultivation. Eradication efforts increased 3 per cent nationwide, from around 11,000 to some 11,400 hectares. At the provincial level, around 7,400 hectares were eradicated in the Cochabamba Tropics region, 3,470 in the Yungas and Norte de la Paz areas, and almost 530 hectares cleared in the Santa Cruz province.

In 2013, the quantity of coca leaf traded in the two authorized markets - Villa Fátima and Sabaca - weighed 19,150 tons, equivalent to 53 per cent of the total coca leaf production. About 93 per cent of the authorized trade took place in Villa Fátima, with the remaining 7 per cent being conducted in Sacaba. The average price of coca leaf in 2013 increased by 5 per cent compared to 2012, up from $7.4 to $7.8 per kg. The total value of coca leaf production in Bolivia - estimated at around 36,300 tons - decreased from $318 in 2012 to $283 million in 2013. This figure represents a 0.9 per cent share of the country's GDP, compared to the previous year's proportion of 1.2 per cent.

Mr De Leo hailed Bolivia's continuing reduction of the area under coca cultivation, which is on track to reach 20,000 hectares, the objective set by the 2011-2015 national strategy against drug trafficking and coca leaf surplus reduction. While speaking to the press, De Leo underlined that in order to achieve the goal of sustained reduction of illicit crop cultivation, good practices show that "eradication efforts should be combined with comprehensive, participatory, long term development programmes in cultivation areas, as well as regional and international cooperation".