Marked decline in coca plant cultivation in Peru, according to 2013 UNODC survey 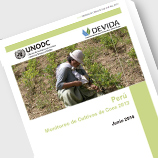 11 June 2014 - The cultivation of coca bushes, which provide the raw material for cocaine production, is down some 17.5 per cent in Peru, according to the 2013 national coca crop monitoring survey presented today in Lima by the United Nations Office on Drugs and Crime (UNODC) and the Peruvian Government. The area under cultivation at the end of 2013 stood at around 49,800 ha, down from the previous year's total of 60,400 ha.

Flavio Mirella, UNODC Representative in Peru, whose office has been jointly producing the annual survey with the Peruvian Government since 1999, said: "This is the most remarkable reduction rate achieved in the last 14 years, mainly because of significant public investment and the presence of Government entities in the main areas of coca crop cultivation and drug trafficking, eradication actions, and the consolidation and enhancement of alternative development efforts in many parts of the country".

Peruvian authorities eradicated over 23,900 ha of coca crop, up 68 per cent from 2012. Most of those efforts took place in the Palcazú-Pichis-Pachitea area and the Monzón valley, which have the highest rates of expansion in the area used for cultivation and which serve as key points for the production of illicit coca derivatives produced both locally and elsewhere. Other areas where eradication took place include Alto Huallaga.

The total output of sun-dried coca leaves reached around 121,424 metric tons, with decreases occurring in Monzón and Palcazú-Pichis-Pachitea due to eradication and, to a lesser extent, the voluntary abandonment of cultivation in La Convención and Lares.

As in previous years, some 9000 metric tons of that output were used for the traditional practice of leaf-chewing, leaving some 112,242 metric tons for cocaine production and trafficking.

Farming of coca plants takes place in 13 Peruvian departments, for both illegal and legal purposes. The highest rates of cultivation were found in Cusco and Ayacucho, representing 55.5 per cent of the country's total.   Huanuco saw a decrease from 17.1 per cent to 5.7 per cent of the total production.

In 2013, Kcosñipata and Aguaytía registered an increase in production of 51 per cent and 12.7 per cent respectively,  driven by increased demand for derivatives, such as cocaine base paste, which is trafficked along the border regions. The area used for growing coca  plants was declining in Huipoca until 2013, but increased again after migrants arrived from the eradicated  zones of Alto Huallaga and Palcazú-Pichis-Pachitea. In Bajo Amazonas, the increase in coca crops dropped from 73 per cent in 2012 to just 3.8 per cent in 2013 due to joint Peruvian-Brazilian law enforcement activities.

Since yields shrank after eradication, farm-gate prices for the leaves reached $4.3 per kg in 2013, an increase of around 30 per cent compared to the previous year. Similarly, the average price of base cocaine increased more than 17 per cent, from $737 to $863 per kg, while the end product - cocaine hydrochloride - cost almost 32 per cent more at $1310 per kg.  Meanwhile, seizures of cocaine hydrochloride increased by about 5.2 per cent to around 13,300 kg, whereas seizures of cocaine base paste decreased by 45 per cent to some 10,800 kg.

The survey, which relies on satellite images and field surveys, has been enhanced this year.  In order to obtain more precise data, the methodology to calculate coca plant cultivation, yield per hectare and production has been updated.